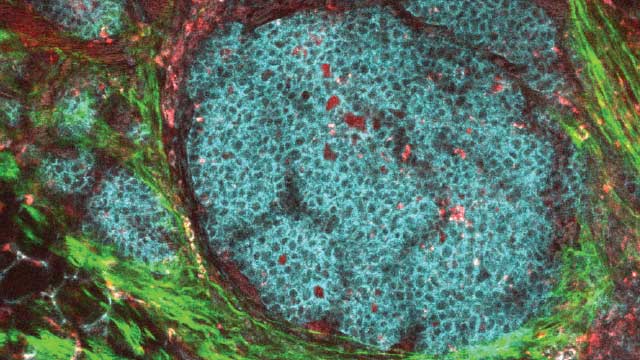 DEFENSIVE PARAMETER
Cancers are notorious for creating a no-fly zone around themselves—called the immunosuppressive tumor microenvironment—that is hostile to immunotherapy treatments. Determining ways to turn off immunosuppressive actors such as tumor-infiltrating regulatory T cells (Tregs) is vital to making immunotherapies more effective.

FRIEND OR FOE?
Conventional wisdom has long held that tumor necrosis factor (TNF) receptor type II (TNFR2) downregulates Treg function, says Xin Chen, a cancer researcher at the University of Macau. But his group had found that TNFR2 in fact acts with TNF to activate, expand, and stabilize the most immunosuppressive type of Tregs, and that it tends to be highly expressed in invasive and metastatic lung cancers. In a new study, Chen and colleagues blocked TNFR2 on Tregs.

THE BLOCKADE
Chen and his colleagues then treated mice that had mouse colon tumor cells grafted under their skin with a TNFR2-blocking antibody called M861 and a low dose of CpG oligodeoxynucleotides (ODN), an anticancer drug. Compared with mice given just CpG ODN, those treated with both drugs had fewer Treg cells, a greater immune response to the tumor, and longer tumor-free survival.

DOUBLING UP
“[The researchers] show the immense value of inhibiting TNFR2 for getting better survival of murine tumors,” says Denise Faustman, an immunobiology researcher at Massachusetts General Hospital. The study suggests, she says, that combining an immunostimulant with a drug that targets tumor-infiltrating Tregs “in effect, results in permanent tumor immunity.” 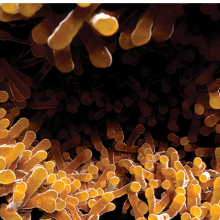