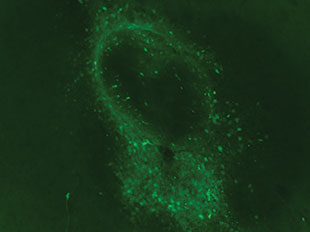 BOOM OR BUST: GFP-labeled neurons of the mouse nucleus accumbens, a region of the forebrain involved in both reward response and depression COURTESY OF ERIC NESTLER

The defeat
In one mouse model of depression, mice are subjected to repeated encounters with more-aggressive counterparts. After such “chronic social defeat stress,” most mice become antisocial, but some come out fine. What sets the resilient mice apart? In 2011, Eric Nestler of the Icahn School of Medicine at Mount Sinai in New York City and colleagues reported that within the brain’s nucleus accumbens, elements of the Wnt signaling cascade are essential for staving off stress responses. Among other cellular roles, the protein β-catenin acts as a transcription factor in the Wnt pathway, so the researchers decided to explore its role in resilience....