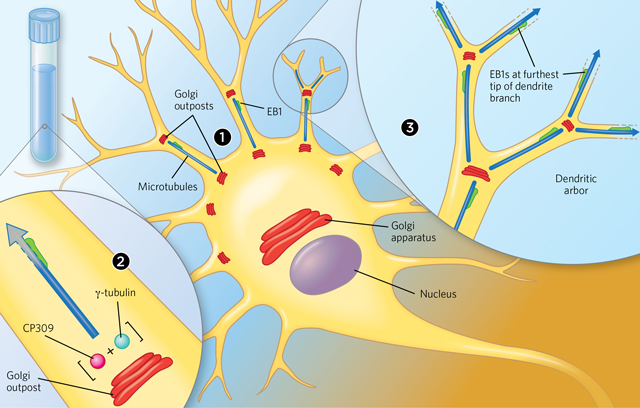 In neurons, microtubules are essential for generating the axonal and dendritic extensions that carry electrical impulses. In most cells, these cylindrical polymers of tubulin grow from centrosomes, but in neurons, centrosomes lose function as the cells develop, suggesting another point of origin for this essential structural protein.

Some researchers have proposed...

The researchers labeled proteins known as EB1 comets, which bind to the growing ends of microtubules, with GFP and tracked microtubule growth in fly larvae. Then they tagged Golgi outposts red, and noticed that EB1 comets were often found at the same site as Golgi outposts, suggesting these satellite Golgi structures play a role in microtubule generation.

When they extracted GFP-labeled Golgi outpost vesicles from fly-embryo neurons and incubated them with unpolymerized tubulin in vitro, microtubules extended from the majority of the vesicles, indicating that they can support nucleation. Staining for the proteins γ-tubulin and CP309—critical for centrosomal microtubule generation—they found that both were present in Golgi vesicles associated with extensions. And when they added a γ-tubulin-blocking antibody, the vesicles could no longer nucleate microtubules. The results “indicate that these proteins are a very important part of the Golgi-mediated nucleation process,” says Ori-McKenney.

Finally, the team showed that the most remote dendritic branches in neurons of flies genetically engineered to lose γ-tubulin function were less stable than those of wild-type neurons, supporting the idea that nucleation from Golgi outposts may be especially important for the growth and stability of delicate outer branches.

Melissa Rolls, a neuroscientist at Penn State University, says the study is interesting but cautions that EB1 comets may indicate the re-initiation of existing microtubules cycling through growth and shrinkage, rather than fresh nucleation. “The authors show some interesting correlations,” says Rolls. “But the lack of nucleation assays or localization of nucleation proteins [to Golgi outposts] in neurons weakens the in vivo analysis.”

“[Rolls] has a point,” Ori-McKenney says, “but the fact that we showed that Golgi outposts nucleate microtubules in vitro is a very good indication that they’re doing the same in vivo.” She says the team also observed EB1 comets growing from Golgi outposts at the very furthest tips of dendritic branches, where no previous microtubules had existed, which suggests de novo nucleation.