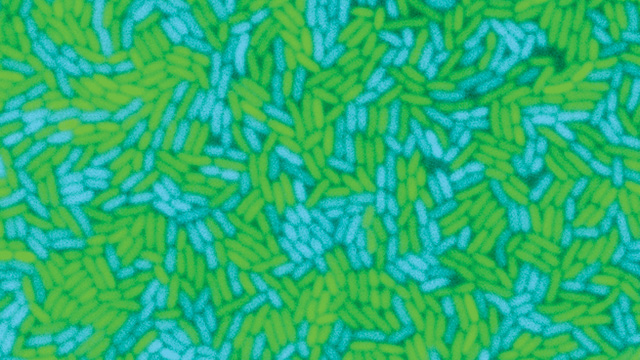 As a major component of the bacterial cell wall, peptidoglycan is both part of a bacterium’s defense strategy and its Achilles heel. Joseph Mougous at the University of Washington and colleagues showed that the bacterium Pseudomonas aeruginosa can oust competitors by using the multiprotein type VI secretion apparatus (T6SS) to degrade a rival’s peptidoglycan. The “elegant” study “made sure every experiment that you’d imagine doing was done,” says Victor DiRita from the University of Michigan.

Previously, researchers thought that T6SS was primarily used to target eukaryotic cells. However, when Mougous and colleagues cultured the bacterium with Pseudomonas putida, P. aeruginosa secreted enzymes that broke the peptidoglycan bonds of the P. putida cell...

The researchers showed that the bacterium also produces proteins that shield it from its own poison, though it’s not yet clear how these proteins function. Lacking these immunity proteins severely impaired the growth of other P. aeruginosa in the presence of an active T6SS system.

The results raise questions about why the “exquisite delivery mechanism” evolved the way it did, DiRita said, and could reveal ways to target this disease-causing pathogen in humans.