ABOVE: Takotsubo syndrome is so named because it causes the heart’s left ventricle to weaken (left) so that the organ assumes a shape reminiscent of the Tako-Tsubo pot used in Japan to catch octopuses (right).
EUR HEART J, DOI:10.1093/EURHEARTJ/EHAB029, 2021; THE SCIENTIST STAFF

Takotsubo syndrome, also known as broken heart syndrome, is a rare, reversible condition with symptoms mimicking a mild heart attack. A disease that disproportionately affects women, TTS is triggered by stressful events such as bankruptcy, the death of a loved one, or divorce, and results in a weakening of the heart’s left ventricle such that it becomes temporarily misshapen.

Previous work has shown that TTS patients have elevated activity in their amygdala, a brain region involved in stress response. What has never been clear, however, is whether “this activity in the brain happens as a result of the syndrome or whether it began many years before,” says Shady Abohashem, a nuclear cardiologist at Harvard Medical School. 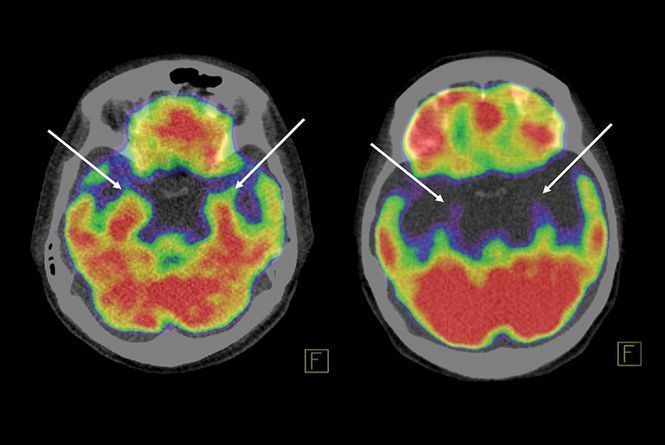 OVERACTIVE: Patients with Takotsubo syndrome (left) had elevated activity in their amygdalas (arrows) before their diagnosis compared with patients who never developed the condition (right).
EUR HEART J, DOI:10.1093/EURHEARTJ/EHAB029, 2021

Abohashem and his colleagues retrospectively analyzed full-body PET/CT scans from 104 patients, most of whom had cancer and 41 of whom had developed TTS since first being scanned, and 63 individually matched controls. The team calculated ratios of the activity in each person’s amygdala to that of two brain regions that attenuate the stress response, the temporal lobe and the prefrontal cortex. Higher amygdala activity was associated with an increased risk for TTS, and among those with the condition, patients with higher ratios had developed TTS roughly two years earlier following the imaging than those with lower ratios. “We can now show that this syndrome happens as a result of chronic stress over years that makes you vulnerable to developing the syndrome more easily and sooner than [less stressed] people,” Abohashem says.

“This study confirms our suspicion that there’s a relationship between amygdala activity and future risk of Takotsubo,” says Janet Wei, a cardiologist at Cedars-Sinai Medical Center who was not involved in the work. The results, she adds, “necessitate further study to see why these patients have higher amygdala activity and how it actually regulates the acute response.”