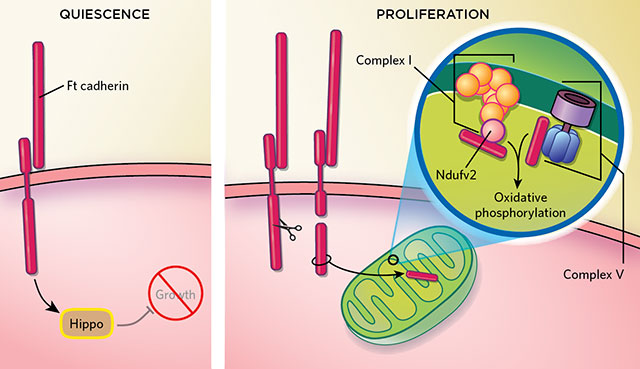 ENERGY SWITCH: In quiescent fruitfly cells, a cell-adhesion molecule, Ft cadherin, inhibits growth by activating the Hippo pathway (above, left). Upon the severing of the cytosolic arm of Ft cadherin, the liberated piece enters a mitochondrion, where it interacts with two groups of proteins, Complex I and Complex V, promoting oxidative phosphorylation and lifting Hippo’s repression of growth (above, right). © KIMBERLY BATTISTA, BASED ON A. SING ET AL., CELL, 158:1293-1308, 2014.

When clustered together in tissues, cells sense and respond to their neighbors by way of membrane receptors, which relay signals informing individual cells when and in what directions to multiply. The loss of—or failure to respond to—these cues can spill over to cause cancer or other diseases. Researchers previously knew that...

In 2003, Helen McNeill of the University of Toronto and colleagues found that Ft cadherin—a giant protein with arms projecting from both sides of the cell membrane—binds to at least 58 different cytoplasmic proteins in fruit flies. So McNeill and her colleagues set out to find other roles Ft cadherin might play.

Using RNAi to reduce the expression of these binding partners one by one, the group examined the role of each protein in controlling growth and cell organization in Drosophila eye and wing cells. Surprisingly, they found the most disruptive effects when they knocked down a mitochondrial protein named Ndufv2, which is part of complex I, a group of respiratory enzymes embedded in the inner mitochondrial membrane. Deleting the section of Ft cadherin that binds this protein destabilized complex I, increased levels of reactive oxygen species (ROS), and incited cells to rely on aerobic glycolysis, rather than oxidative phosphorylation, for energy. Cells with a mutant version of the ft gene also showed significant structural defects in their mitochondria.

Further experiments revealed that Ft cadherin interacts with Ndufv2 by breaking off a chunk of its cytoplasmic arm, which enters the mitochondrion, where it modulates cellular respiration. “We were completely surprised to see this direct effect of Ft cadherin,” says McNeill. The results are “the first demonstration of direct regulation of mitochondrial complex stability by a cell surface protein,” the authors wrote in their paper. Still unknown are the triggers for cleaving Ft to produce the chunk that enters the mitochondrion.

Based on their data, the researchers propose that in quiescent cells, Ft acts at the exterior plasma membrane to suppress cell division and growth. But when the cleaved-off cytosolic Ft fragment enters the mitochondrion and binds to complex I, it powers up oxidative energy metabolism—while its detachment simultaneously lifts the cadherin’s inhibitory effect on proliferation. Thus this shift to the cleaved form that boosts energy and enables cell division is vital to ordered growth and development, but if dysregulated “may be foundational” to cancer cell growth, according to McNeill.

The results can help researchers “find better metabolic links” that explain how cancer cells continue to multiply even in crowded, hypoxic tissue environments, says Madhuri Kango-Singh of the University of Dayton in Ohio. “This is a molecular clue to understanding how cancer cells survive,” she says.