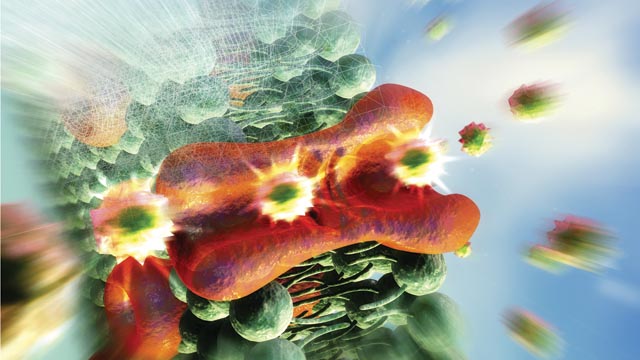 Pounding heart, tight muscles, and rapid breathing are all familiar effects of the “fight or flight” response. Adrenaline receptors turn on protein kinase A (PKA), which opens calcium channels in muscle tissue, tensing the body for action. But which residues PKA phosphorylates to release a stopper mechanism within the channel was a 25-year-old mystery—until William Catterall and colleagues from the University of Washington in Seattle painstakingly worked out the details.

The whole field was stumped, says Catterall: “It was an embarrassment we were all sweeping under the rug.” His lab tried to put the complex together in transfected cells, but they couldn’t get it to work. “It was a lot of frustration for multiple people...

Then they had the idea to reduce the amount of a critical component. PKA is anchored to the membrane via a protein called AKAP. Catterall and colleagues noticed that too much free AKAP prevented the PKA bound to AKAP from reaching the channel. Once they reduced the amount they were putting into the cells, PKA was able to phosphorylate the channel and release the stopper mechanism.

Cracking this problem has now made it possible to study the regulation of calcium channels in normal heart function, and to ask if it’s impaired in heart failure. Catterall’s lab has just started doing those experiments. “We’re optimistic we will learn something interesting,” he says.