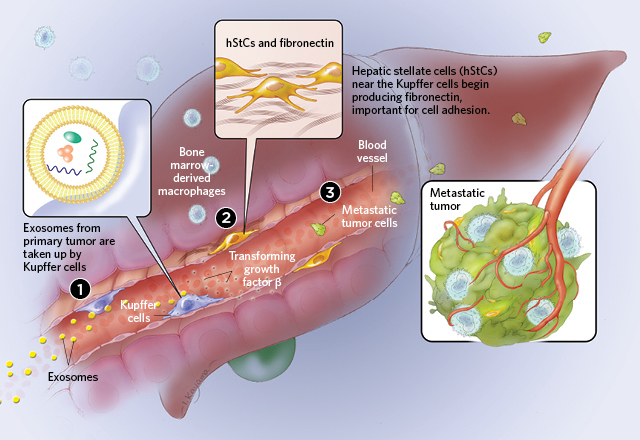 PREPARING THE TURF: Before tumor cells arrive at their metastatic destination, part of the site is readied for them. One recent study of liver metastasis in mice found that resident macrophages called Kupffer cells take up exosomes from the original tumor (1). Additionally, macrophages from the bone marrow show up upon the release of fibronectin by other liver cells called stellate cells (2). A current proposal for additional steps in metastatic niche development includes the recruitment of epithelial cells and fibroblasts, which contribute to angiogenesis, and, finally, the arrival of tumor cells themselves (3). © IKUMI KAYAMA/STUDIO KAYAMA

In 2005, David Lyden noticed something unexpected. He and his colleagues at Weill Cornell Medical College had been researching metastasis—the spread of cancer from one part of the body to another. The team had shown that bone marrow–derived cells (BMDCs) were recruited to future metastatic sites before the arrival of tumor...

But carefully studying images of this microenvironment in the lung tissue of mice, Lyden saw something else. Amongst the BMDCs, the micrographs showed tiny specks, far too small to be cells, gathering at the future site of metastasis. “I said, ‘What are these viruses doing here?’” recalls Lyden. “I had no idea about exosomes, microvesicles, and microparticles.”

It’s like the colonization
of a new planet. They’re
terraforming the environment
to make it hospitable.—Joshua Hood,
University of Louisville

Those specks, Lyden would come to realize, were in fact primary tumor–derived exosomes. These membrane-enclosed vesicles packed full of molecules are now attracting growing attention as important mediators of intercellular communication, particularly when it comes to cancer’s insidious capacity to spread from one organ to another.

Tumors require a community of support cells, including fibroblasts, BMDCs, and endothelial cells, to provide functional and structural assistance and to modulate immune system behavior. Bringing together the first members of this community before the arrival of tumor cells is all part of cancer’s survival strategy, says Joshua Hood, a cancer researcher at the University of Louisville.

“It wouldn’t be efficient for tumor cells to strike out on their own, and just say, ‘Oh, here we are!’” he says. “They would run the risk of being destroyed.” Preparing a “nest” in advance makes the process much safer. “Then the tumor can just efficiently come along and set up shop without ever having to fight much of a battle with the immune system.”

But although Lyden’s group had shown that this preparation was taking place, it remained unclear how such a process might be regulated. For the next few years, many cancer researchers believed that tumor cells must communicate with the premetastatic niche primarily through tumor-secreted signaling molecules such as cytokines.

Meanwhile, research into extracellular vesicles, previously considered biological garbage bags, was revealing new modes of intercellular communication. In 2007, a group of scientists in Sweden discovered that exosomes, tiny vesicles measuring just 30 nanometers to 100 nanometers across, transport mRNA and microRNAs intercellularly, with the potential to effect changes in protein synthesis in recipient cells.2 A new means for tumors to regulate distant cellular environments came into focus, and research on exosomes exploded. In 2011, Hood and his colleagues showed that exosomes facilitate melanoma metastasis through the lymphatic system.3 The following year, Lyden’s group demonstrated that tumor-derived exosomes can direct BMDCs to one of melanoma’s most common sites of metastasis, the lung.4 Exosomes, it seemed, had been underestimated.

Armed with the knowledge that exosomes are involved in multiple stages of melanoma metastasis, Lyden’s lab went searching for the vesicles’ potential role in the metastasis of other cancers. Turning to pancreatic ductal adenocarcinoma (PDAC)—one of the most lethal cancers in humans—postdoctoral researcher Bruno Costa-Silva led a series of exhaustive in vitro and in vivo experiments in mouse models to detail the process of premetastatic niche formation in the liver, PDAC’s most common destination. The team’s results, published last May, reveal an intricate series of sequential steps—mediated by PDAC-derived exosomes (Nature Cell Biol, 17:816-26, 2015).

Using fluorescence labeling, Lyden’s group observed that PDAC-derived exosomes are taken up by Kupffer cells, specialized macrophages lining the outer walls of blood vessels in the liver. There, the exosomes trigger the cells’ secretion of transforming growth factor β (a type of cytokine involved in cell proliferation), plus the production of fibronectin by neighboring hepatic stellate cells, and the recruitment of BMDCs.

The researchers also showed that this cascade of events could be inhibited by depleting exosomal macrophage migratory inhibitory factor (MIF), an abundant protein in PDAC exosomes. “If you target the specific proteins of exosomes, you can reduce metastasis,” explains coauthor Héctor Peinado, leader of the microenvironment and metastasis group at the Spanish National Cancer Research Center.

For Hood, the findings add to a developing picture of exosomes’ vital role as “vanguard” in the progression of cancer. “It’s like the colonization of a new planet,” he says. “They’re terraforming the environment to make it hospitable.”

Although research was revealing the steps involved in forming premetastatic sites, it was less clear how these sites were being selected. “This has always been a great mystery in cancer,” says Ayuko Hoshino, a research associate in Lyden’s lab. “Why do certain cancers metastasize to certain organs?”

One theory, proposed in 1928 by pathologist James Ewing, suggested that anatomical and mechanical factors explained organ specificity in metastasis. The premetastatic niche, then, might form wherever exosomes are likely to land. But this couldn’t be the whole story, says Hoshino. “For instance, there’s eye melanoma. Thinking about that site, you could imagine it metastasizing to the brain. But actually, it almost only metastasizes to the liver.”

Because exosomes arrive at metastatic sites before tumor cells, the team reasoned, perhaps the exosomes themselves were organotropic (i.e., attracted to particular organs or tissues). Sure enough, Lyden says, when Hoshino and Costa-Silva began injecting tumor-derived exosomes into mice, “their preliminary findings were that wherever they injected the exosomes, the pancreatic cancer ones were ending up in the liver and the breast metastasis exosomes would end up in the lung.”

We’re talking about astrocytes in the brain secreting exosomes to give welcome help to the cancer cells.—Dihua Yu,
University of Texas
MD Anderson Cancer Center

Using mass spectrometry, the researchers analyzed the protein content of exosomes from lung-tropic, liver-tropic, and brain-tropic tumors. They found that the composition of exosomes’ integrins—membrane proteins involved in cell adhesion—was destination-specific (Nature, 527:329-35, 2015). Exosomes bearing integrin α6β4, for example, were directed to the lung, where they could prepare a premetastatic niche potent enough even for normally bone-tropic tumor cells to colonize. Integrin αvβ5, meanwhile, directed metastasis to the liver.

The researchers also showed that exosomal integrins didn’t necessarily correspond to the parent-cell proteins, making exosomes potentially better indicators of where a cancer will spread than the tumor cells themselves. “We can show that an integrin that’s high in the tumor cell might be completely absent in the tumor exosome or vice versa,” says Lyden, adding that, taken together, the results point to a role for exosomes in “dictating the future sites of metastasis.”

“It’s a beautiful story,” says Dihua Yu, a molecular and cellular oncologist at the University of Texas MD Anderson Cancer Center. “This is a very novel finding that gives really good indicators for potential strategies to intervene in metastasis.”

In the same month that Lyden’s group published its work on organotropism, Yu’s own lab published a different exosome study—one that told another side of the story.

Yu and her colleagues had found that when tumor cells in mice metastasized to the brain, they downregulated expression of a tumor suppressor gene called PTEN, and became primed for growth at the metastatic site. When the tumor cells were taken out of the microenvironment and put in culture, however, they restored normal PTEN expression.

The researchers demonstrated that a microRNA from astrocytes—star-shape glial cells in the brain—reversibly downregulated the levels of PTEN transcripts in the tumor cells, but they couldn’t figure out how the microRNA was getting into the tumor. Blocking “obvious signaling pathways,” such as gap junctions, failed to have an effect, Yu says.

Scrutinizing astrocyte-conditioned media using electron microscopy, the researchers identified spherical vesicles between 30 nanometers and 100 nanometers in diameter—the defining size of exosomes. Exposing mouse tumor cells to these vesicles increased cell microRNA content and reduced PTEN expression (Nature, 527:100-04, 2015). The study revealed yet another role for exosomes in the communication between tumors and their microenvironment.

The findings were a surprise, says Yu, not least because they showed a different perspective from the bulk of recent research. “We’re talking about astrocytes in the brain secreting exosomes to give welcome help to the cancer cells,” she says.

“I find it an extremely interesting paper because it shows that the astrocytes can change the whole phenotype of the tumor in the brain,” says Lyden. He adds that the results underline the importance of studying the mutational status of tumors at various sites. “All this work in exosomes, it adds to the complexity,” he says. “We can’t just target tumor cells at the primary site. We’ll have to understand all the details of metastasis if we’re really going to tackle it.”

The discovery of multiple roles for exosomes in metastasis has generated excitement about the potential for their use in diagnostics and treatment. As protective containers of tumor-derived genetic material, exosomes could provide information about the status of cancer progression. And as mediators of premetastatic niche formation, they make obvious targets for inhibition. (See “Banking on Blood Tests,” here.)

Exosomes might even be useful as vehicles to deliver drugs because they’re patient-matched and “naturally designed to function in a biocompatible way with living systems,” says Hood. “You could take them out of people, and at some point down the road try to have patients be their own nanofactory, using their own particles for treatment purposes.”

But there’s still a lot to be done. Exosome biogenesis is not well understood, and many studies lack quantitative insight into the vesicles’ contents.5 “Mechanistically, we are still far from understanding the whole system,” says Peinado. The focus on exosomes should not eclipse research on the roles of other vesicles and microRNA-carrying protein complexes in metastasis, he adds. “I think we have to really be aware that exosomes may be only part of the mechanism, [one] that we need to target in combination with many others.”