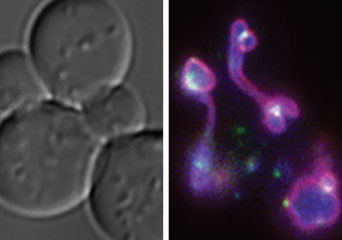 Organelles
Cells ensure that daughter cells contain all their necessary organelles, but just how this occurs is not entirely clear. If a daughter yeast cell doesn’t inherit a vacuole, for instance, it will grow the organelle from scratch. Lois Weisman’s team at the University of Michigan hadn’t probed too deeply into this backup pathway until her postdoc Yui Jin recently asked what would happen if both routes to getting a vacuole were blocked.

Stalled out
Jin and Weisman developed a method to halt both vacuole inheritance and biogenesis in yeast, “and what happened was that [the cell] arrested at a very specific point in early G1,” says Weisman. After the specific arrest, the cell eventually died.

Moving forward
The duo also found that a newly formed vacuole—grown when inheritance didn’t occur—is not mature, and a cell won’t progress through the next cycle until the organelle is fully functional. Specifically, signaling through the vacuole’s TORC1 complex, involved in metabolism, was required for the cell cycle to move ahead. “These studies suggest a new checkpoint that ensures that the daughter cell has a vacuole,” Weisman said in an email.

Cross talk
Richard Rachubinski of the University of Alberta says the results buck the old idea that cell-cycle progression and organelle inheritance operate independently. “When I was coming through as a young cell biologist, everything seemed to work in isolation and [different processes] didn’t talk to each other in the cell, and now it’s exactly the opposite,” he says. “They all talk to each other. And this really beautiful work shows this in spades.”