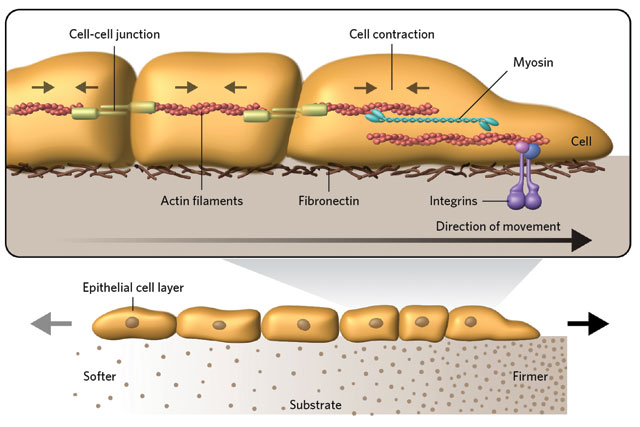 PULLING THROUGH: Groups of human epithelial cells migrate toward firmer ground due to linkages between cells and traction with the substrate. Cells adhere to their neighbors through intercellular junctions, which are connected to myosin motor proteins within each cell. The myosin motors cause the cells to contract and tug on one another, but cells residing atop firmer substrate get a better grip through integrin proteins and are therefore able to pull the group in their direction. © GEORGE RETSECK. ADAPTED FROM SUNYER ET AL., SCIENCE, 353:1157, 2016. REPRINTED WITH PERMISSION FROM AAAS

The physical features of a cell’s surroundings—the texture of a substrate and the push-pull of intercellular forces—have often taken a back seat to scientific interest in the chemical environment of cells. But biologists are finding time and again that physical signals matter. In 2000, researchers observed that fibroblasts embedded in a gel migrate toward areas where the gel is stiffest—an apparent response to physical rather than chemical signals termed durotaxis. The discovery turned heads. The report attracted almost 2,000 citations over the next decade and a half, and it became a cornerstone of the emerging field of mechanobiology, says Xavier Trepat, who studies durotaxis at the Institute for Bioengineering of Catalonia in Spain.

Exactly how cells “durotax” has been a mystery. Available research implicates durotaxis in a number of important cellular processes, from neuron development to cancerous tumor formation, but “there are only a few papers out there proposing mechanisms,” Trepat says, none of which give a definitive explanation.

Trepat and his colleagues studied the problem using traction force microscopy, which involves embedding fluorescent nanoparticles into a gel substrate and tracking the particles’ displacement. As cells drag themselves around on the gel substrate, they leave a record of the forces they exert, allowing researchers to decode the physics at play.

When Trepat and his team placed mammary epithelial cells on a gel substrate of graded firmness, they saw the cells durotax, but also noticed something strange. Only cells in a group moved toward the stiffer area, whereas solitary cells moved randomly. The team’s effort to explain this quirk led them to a molecular and mathematical theory of durotaxis.

Researchers had already known that epithelial cells move around by linking onto each other with protein junctions and pulling on the substrate with myosin motor proteins, like someone climbing a rope. Using traction measurements, Trepat and colleagues revealed that epithelial cells in a group do not all move in coordination, but that each edge of the group pulls outward at the same time. Cells sitting on stiffer substrate get better traction, so they win this tug-of-war, and the whole group moves toward them. Durotaxis is not a complex signaling process, they realized, but the result of simple physics.

The discovery brings some clarity to a young field still rife with questions. “Cell migration and cell growth have been studied for decades now, but people have not thought about forces,” says Kristian Franze, who studies mechanics in nervous system development and pathology at the University of Cambridge.

“This paper just makes so much sense,” Franze says, but adds with a laugh that in the field of mechanobiology at large, “we barely know anything.” 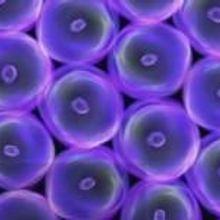