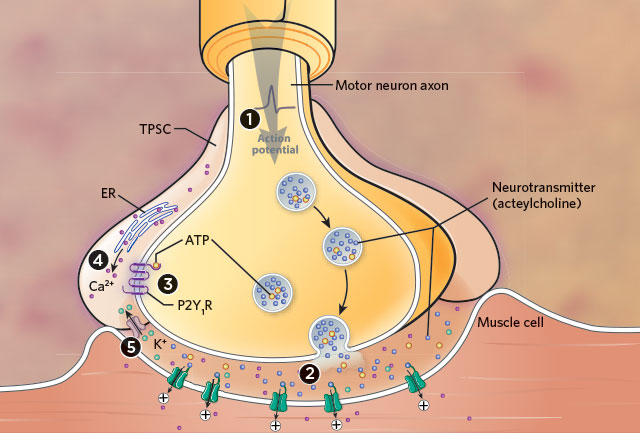 MUSCLE HUSTLE: After stimulation with an action potential (1), the synaptic terminal of a motor neuron releases acetylcholine and ATP. (2) Acetylcholine activates receptors in the muscle, which spurs voltage-gated sodium channels to open, triggering an action potential in the muscle, which contracts. At the same time, ATP or ADP stimulates P2Y1 receptors (3), which causes calcium ions to be released from the endoplasmic reticulum of the terminal/perisynaptic Schwann cell (TPSC) (4). In response, perisynaptic potassium ions (K+) produced by the muscle and neuronal cells move into the TPSC (5). Regulation of perisynaptic potassium ions by TPSCs is thought to reduce the ions’ ability to inactivate voltage-gated sodium channels during repeated firing, thus reducing muscle fatigue.
See full infographic: WEB© KIMBERLY BATTISTA

At first glance, neurons and muscle cells are the stars of gross motor function. Muscle movement results from coordination between nerve and muscle cells: when an action potential arrives at the presynaptic neuron terminal, calcium ions flow, causing proteins to fuse with the cell membrane and release some of the neuron’s contents, including acetylcholine, into the cleft between the neuron and muscle cell. Acetylcholine binds to receptors on the muscle cell, sending calcium ions into it and causing it to contract.

But there’s also a third kind of cell at neuromuscular junctions, a terminal/perisynaptic Schwann cell (TPSC). These cells are known to aid in synapse formation and in the repair of injured peripheral motor axons, but their possible role in synaptic communications has been largely ignored.

Problems with synaptic communication can underlie muscle fatigue, notes neuroscientist Thomas Gould of the University of Nevada, Reno, in an email to The Scientist. “Because these cells are activated by synaptic activity, we wondered what the role of this activation was.” To investigate, he and his colleagues stimulated motor neurons from neonatal mouse diaphragm tissue producing a calcium indicator, and found that TPSCs released calcium ions from the endoplasmic reticulum into the cytosol and could take in potassium ions from the synaptic cleft between neurons and muscle cells. However, TPSCs lacking the protein purinergic 2Y1 receptor (P2Y1R) didn’t release calcium or appear to take in potassium ions.

Calcium release “is believed to be a very important intracellular signal initiated by neural activity,” Gould says. And the results show that TPSCs contribute to continued muscular contraction by releasing the ion and possibly taking up potassium. (Potassium ions contribute to fatigue when they accumulate in the synaptic cleft.) The results also suggest that P2Y1R or its downstream pathway help the Schwann cells to mediate muscle fatigue, he notes.

“I think [the finding] reminds people that, similar to other perisynaptic glial cells like astrocytes, TPSCs may regulate extracellular ionic concentrations at sites where these concentrations matter, such as the synaptic cleft,” Gould says. He plans to examine the role in muscle fatigue of other ions, such as protons, in future studies.

Chien-Ping Ko, a neurobiologist at the University of Southern California who was not involved in the study, calls the work a “technical tour de force.” Gould’s team, he says, “does a nice job showing the connection of internal calcium ion release and potassium ion accumulation to muscle fatigue”—though it’s not yet clear whether the same mechanism applies in adult mice or in other animals.

That said, Ko suggests the study points to potential drug targets for preventing muscle fatigue in diseases such as spinal muscular atrophy or hyperkalemic periodic paralysis. If therapeutics could be developed to boost internal calcium-ion release and potassium ion uptake in TPSCs, it might improve patients’ muscle function, Ko says.