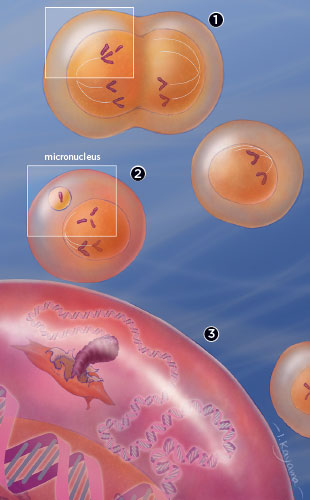 BREAKING FREE: When a chromosomally unstable cell divides, its chromosomes can become disordered during anaphase (1). Errors in segregation can allow chromosomes to leak into the cytosol, where they form “micronuclei” (2), which trigger an inflammatory response in the daughter cell (3). This response can lead to metastasis.
See full infographic: WEB© IKUMI KAYAMA/STUDIO KAYAMA

Aneuploidy—the presence of abnormal numbers of chromosomes in a cell—is associated with cancer metastasis, but scientists have struggled to connect the mechanistic dots underlying the phenomenon. To explore the association, a team of researchers led by Lewis Cantley, a cancer biologist at Weill Cornell Medicine, and Sam Bakhoum, a radiation oncologist at Memorial Sloan Kettering Cancer Center, recently injected chromosomally unstable breast and lung cancer cells into mice,...

These findings led the scientists to examine whether the cells had an innate immune response to cytosolic DNA. Ongoing segregation errors in cancer cells can allow chromosomes to leak from the nucleus into the cytosol, forming “micronuclei” that expose naked DNA to the cytosol when they rupture. The research team first compared genomic integrity—a proxy for chromosomal stability—of primary tumors and metastases in data from a 2015 study, and found more instability in the metastases. They then transplanted metastatic cancer cells with chromosomal instability into mice, and found that an antiviral immune response called the cGAS-STING pathway was chronically switched on in the cells.

Normally, epithelial cells immediately die when cGAS-STING signals are expressed. But Bakhoum says metastatic cancer cells may adapt not just to survive the activation, but to use it to their advantage. That’s because the same cytosolic DNA–activated pathway mediates the migration of macrophages and other immune cells to an area apparently under viral attack. This raises the possibility that cancer cells are “reacting to cytosolic DNA like immune cells rather than like normal epithelial cells,” he says, enabling them to metastasize to distant sites.

“The analogy I like to use is [a] wolf in sheep’s clothing,” adds Cantley. Testing for cytosolic DNA in a primary tumor could “be predictive of who’s going to metastasize,” he says.

Virginia Tech cell biologist Daniela Cimini, who has collaborated with Bakhoum in the past but was not involved in this study, says it raises a red flag for one therapeutic avenue. “A lot of labs right now are focusing on possibly increasing chromosomal instability as a therapeutic strategy for cancer,” because such instability appears to disrupt tumor formation and early progression, Cimini tells The Scientist. “If [chromosomal instability] promotes metastasis, now we’re in trouble.”

Cantley says the study may also have implications for the use of current treatments, such as radiation and chemotherapy, that also induce chromosomal instability. “We . . . have to be cognizant of the possibility that many of our therapies for primary tumors are probably actually increasing the probability of metastasis.”