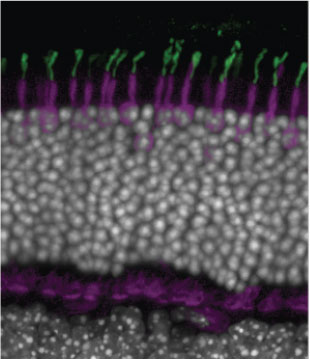 EDGE OF SIGHT: The outer segments (green) of photoreceptors in the mouse retina rely upon a pair of microRNAs for proper structure and function. NEURON, BUSSKAMP ET AL., 2014

The background
In retinal photoreceptors, the conversion of light to an electrical signal occurs in an organelle known as the outer segment. Malfunctioning outer segments are linked to cone cell diseases and blindness. Previous studies have shown microRNAs (miRNAs)—noncoding RNAs that repress gene expression—are essential to normal cone cell development, but how they operate in adult retinas was unclear.

The experiment
Botond Roska of the Friedrich Miescher Institute for Biomedical Research in Switzerland and his colleagues developed knockout mice and in vitro models in which all miRNAs were depleted in fully formed retinas. Lacking miRNAs, cone cells lost their outer segments and showed reduced responses to light, but the cells did not degenerate. “Finding a phenotype where the cells lose the outer segment but stay absolutely intact was very unexpected,” says Roska. Reexpressing two of the most abundant cone miRNAs, miR-182 and miR-183, restored outer segments and normal light responses in cultured retinal cells.

The functions
These two miRNAs are thought to play a role in lipid metabolism within cells. Roska speculates that they may help regulate a supply of lipids and other molecules to cone cells’ apical membranes to renew outer segments.

The implications
The outer segments restored by miRNAs 182 and 183 in culture are shorter than those in normal mouse retinas. Nonetheless, these miRNAs could enhance the utility of retina-in-a-dish models. “The field is basically stuck right now because nobody knows how to make a photoreceptor outer segment,” says molecular ophthalmologist Jean Bennett of the University of Pennsylvania. “This could be a clue.”