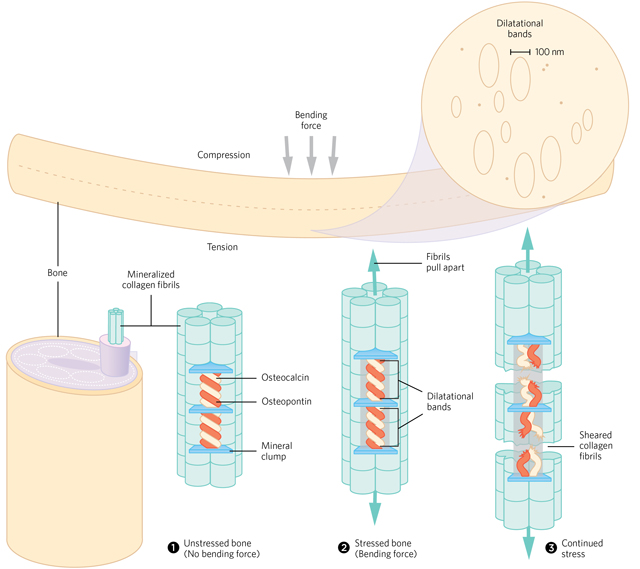 BREAKING BONDS: In unstressed bone, two interacting proteins—osteocalcin and osteopontin—connect clumps of mineral that are in turn fused to collagen fibrils (1). In a bone sample subjected to bending, scores of 100-nanometer-wide elliptical voids appear in the region where tension occurs. The researchers propose that dilatational bands form when the two proteins are pulled apart (2). If the force subsides, the bonds can reform, the nanoscale voids are repaired, and no further damage is done. But if the force continues, bonds between the two proteins break and collagen fibrils are sheared, leading to submicroscopic cracks; a collection of which makes up what is referred to as diffuse damage (3). LUCY READING-IKKANDA

Bone is tough, thanks largely to its complex hierarchical structure. At multiple levels, its constituent materials...

Deepak Vashishth of Rensselaer Polytechnic Institute in Troy, New York, and colleagues approached the problem by bending small sections of human tibia to its uppermost physiological limits and then using scanning electron and atomic force microscopy to look at the resulting damage. After staining to locate areas of diffuse damage at the microscale, then zooming in to the nanoscale, the researchers observed scores of distinct ellipsoidal voids, each around 100 nm wide, within the collections of mineral crystals between bundles of collagen, a phenomenon that had not previously been identified. “It’s like looking at stars in the night sky—all these little dilatational bands appear [in the bone],” says Vashishth.

They then looked at the distribution and concentration of two associated proteins—osteocalcin (OC) and osteopontin (OPN)—that connect mineral aggregates to each other and to collagen fibrils. The team found the proteins present in greater numbers around dilatational bands of stressed bone than in adjacent nondamaged areas. The proteins’ involvement was confirmed when the researchers tested OC–, OPN–, and OC/OPN–  knockout mice, and saw no dilatational band formation. “We also found that bone toughness was dramatically reduced in the knockout mice,” adds Vashishth, a finding that links the formation of dilatational bands to damage—and damage control—at higher scales.

The research showed “that it is not only calcium phosphate crystals and collagen, which make up the vast majority of bone, but also these two proteins that enable mechanisms for the dissipation of energy,” says Philipp Thurner of the University of Southampton in the U.K., who was not involved in the study. “That’s a significant insight into what the failure mechanism could be at the nanometer scale, which was a complete unknown.”

Vashishth proposes that dilatational bands result when tensile loads—pulling or stretching forces—begin to pull apart OC and OPN complexes. If the loading stops, he speculates, the bands will close. But if loading continues, they cause shearing and rupture of the fibrils, which in turn lead to cracks at the micrometer scale. “The bands are an energy dissipation step, and without that you get larger cracks right away,” says Vashishth.

Such insights “could be very significant, because for about 30 years therapy for osteoporosis has not changed—and yet we’re all living longer,” says Thurner.