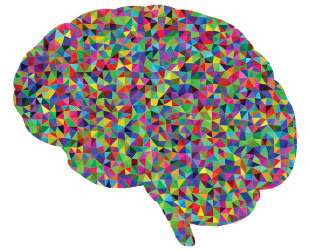 Brain aglow
Neurons can emit ultraweak photons when stimulated by the abundant neurotransmitter glutamate, and experiments suggest that the emitted light can travel along rat nerve fibers. Yet most researchers don’t believe there’s enough evidence to say whether these so-called biophotons act as communication signals, according to Michal Cifra, who studies the phenomenon at the Institute of Photonics and Electronics in the Czech Academy of Sciences.

Catching some rays
To test for a biological role for biophotons, a team in China analyzed brain slices from six species of roughly increasing intelligence: bullfrog, chicken, mouse, pig, rhesus monkey, and human. The group
doused the tissues with the neurotransmitter glutamate and determined
the photon emissions’ wavelengths using a newly designed spectrometer.

Spectral shift
For the most part, the more intelligent the species, the longer the biophoton wavelength: from about 600 nm among bullfrogs to 700 nm among humans, on average. (Chickens’ biophotons had longer wavelengths than mice’s, suggesting to the authors that chickens are smarter.) Because red-shifted light has lower energy, this spectral slide could help species, if they do use light biologically, to expend less energy, says study coauthor Jiapei Dai of South-Central University for Nationalities in Wuhan. “It’s a correlation,” says Dai. “But maybe [it] gives an explanation for human high intelligence.”

Harsher light
Cifra and Vahid Salari, who studies biophotons at Isfahan University of Technology in Tehran, concur that the findings are novel. But the team’s conclusions overreach. Cifra doubts “whether this spectral shift is [really] caused by some evolutionary function, or [if] it is just a coincidental artifact of having tissues of differing molecular content.”