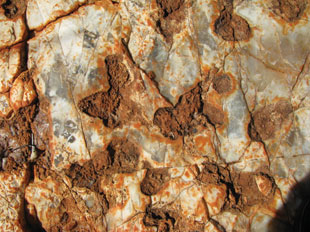 OLD MICROBES: These chips in the rocks of Western Australia’s Dresser Formation are thought to have been made by ancient microbial mats.COURTESY NORA NOFFKE

The background
Modern microorganisms leave traces on substrates called microbially induced sedimentary structures (MISS)—textures that arise from a biofilm or microbial mat interacting with the dynamics of the sediments upon which it forms. Until recently, the oldest fossilized MISS, located in South Africa, dated back to 3.2 billion years ago. However, evidence from microfossils and stromatolites, another rock structure shaped by bacteria, suggests that microbes existed at least 200 million years earlier.

The evidence
In the Dresser Formation in Western Australia—one of the only places in the world with well-preserved 3.48-billion-year-old rocks—Nora Noffke...