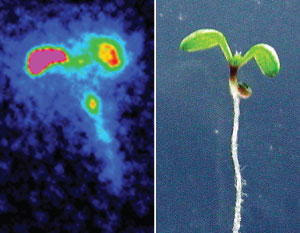 ATP SENSORS: Treatment of an Arabidopsis seedling (right) with extracellular ATP causes an increase in intracellular calcium, as indicated by the colors (left).KIWAMU TANAKA

The missing piece
The membrane receptors that help mammalian cells respond to extracellular ATP have been known for two decades. Over the years, evidence that plants also use extracellular ATP had bubbled up in the literature, but no one had identified the receptor until a determined team of plant scientists spent five years working on a massive genetic screen in Arabidopsis.

The find
Gary Stacey’s group at the University of Missouri analyzed 50,000 mutagenized seedlings to find one that did not respond to the addition of extracellular ATP. The gene responsible encodes a lectin receptor kinase, a finding that surprised Stacey, given that lectins are usually associated with proteins that bind sugars. “When we found this, it made me worry,” he says, “but then we found it bound ATP with high affinity.”

The signals
Knowing the receptor’s identity can help uncover the role of extracellular ATP, which Stacey suspects to be important in stress responses. His group showed in the study that many of the genes whose expression is induced by ATP signaling are also expressed following wounding. “Everyone assumed it was wounding” causing this upregulation, he says. “But now we showed it’s the ATP coming out of the wound that’s inducing this response.”

The others
“Their data [are] quite convincing” that the lectin receptor kinase is an extracellular ATP receptor, but there might be others waiting to be found, says Stephen Chivasa, who studies extracellular ATP in plants at Durham University in the U.K. “My suspicion is that there will be even more coming out.”