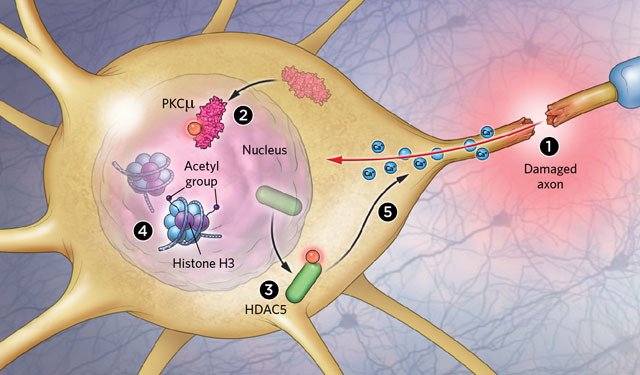 CELL IN DISTRESS: In cultured neurons, damage to the axon results in a wave of calcium ions surging toward the cell body (1). Subsequently, the enzyme PKCμ is phosphorylated (2), resulting in the release of histone deacetylase 5 (HDAC5) from the nucleus (3). Following HDAC5’s departure, acetylation of histone H3 increases (4), upregulating the expression of genes involved in regeneration. HDAC5 then ends up congregating at the site of injury (5). © SCOTT LEIGHTON

To regenerate after injury, a nerve cell must turn on gene programs that have been silenced since development. Epigenetic modifications, important players in the activation and silencing of genes, may underlie the ability for a cell to rebuild. “At some level, some epigenetic change must occur globally to allow the neuron to reprogram...

In 2012, Cavalli’s group showed that when axons are injured in peripheral sensory neurons, a wave of calcium ions courses from the site of the injury down the axon to the cell body. Subsequently, histone deacetylase 5 (HDAC5)—an epigenetic regulator of gene expression—accumulates at the tips of the damaged axons. There, HDAC5 deacetylates tubulin, destabilizing the microtubules, an event crucial for a growth cone to form and the axon to regenerate.

To learn where HDAC5 at the injury site comes from, Cavalli and her colleagues damaged peripheral neurons—either cultured dorsal root ganglia (DRG) cells or the sciatic nerves of four-month-old mice—by severing or crushing the cells’ axons.

Consistent with their earlier work, a wave of calcium ions propagated down the axon and resulted in the phosphorylation of PKCμ—an enzyme known to trigger the exit of HDAC5 from the nucleus in cardiomyocytes and hippocampal neurons. Just as in these other cell types, the team found that PKCμ activation in cultured neurons caused the transport of HDAC5 out of the nucleus. They also demonstrated that HDAC5 moved from the cell body to the axon tip in both the cultured DRG neurons and in the sciatic nerve.

“The strength [of this work] is the mechanistic understanding” of how peripheral neurons repair themselves, says Hongyan Zou of the Icahn School of Medicine at Mount Sinai in New York City who was not involved in the research. “Can we harness this mechanism in the central nerves?” she asks.

Peripheral neurons can regrow after damage, but neurons in the central nervous system (CNS) have little ability to do so. And Cavalli’s results showed that CNS neurons don’t respond to injury the same way peripheral neurons do: after damage to the optic nerve, retinal ganglion cells did not export HDAC5 from the nucleus, acetylate histone H3, or turn on the genes needed for regeneration. Whether scientists could induce the HDAC5 pathway in the CNS needs to be evaluated, Zou says.

Cavalli is now in the process of doing just that. “What we’re trying to do is manipulate the system, to see if we can improve axon regeneration,” she says.