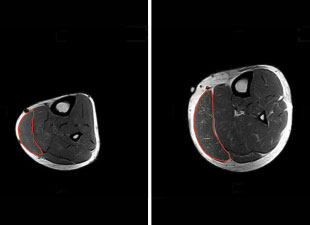 Adipose accumulation
Human muscle is normally around 1.5 percent fat, but can reach up to 11 percent adiposity among the elderly and more than 5 percent in people with obesity, a condition tied to muscle weakness. To figure out how fat affects muscle performance, Hadi Rahemi of Simon Fraser University in British Columbia, Canada, developed an in silico model of a human calf muscle.

Because researchers don’t yet understand precisely how fat is distributed throughout human muscles, “the models we’ve got at the moment are conceptual,” says Wakeling. Working to create more-lifelike simulations using human MRI data is their next step.