Researchers identify a protein that promotes changes in adipose tissue in vitro and in pregnant mice and may help protect against gestational diabetes in humans.

A fetus needs fuel, and a mother’s body undergoes big physiological changes during pregnancy to make sure it gets it. One change is a reduction in insulin sensitivity, meaning that cells become less responsive to insulin signals telling them to take up glucose from the blood. In 5 percent to 9 percent of US pregnancies, cells become so resistant to insulin that they become significantly less effective at keeping blood glucose levels down. Mothers who have this temporary condition, known as gestational diabetes mellitus (GDM), may have an elevated risk of type 2 diabetes and other diseases later in life—as may her children.

Several years ago, Raziel Rojas-Rodriguez, then a PhD student in Silvia Corvera’s lab at the University of Massachusetts, discovered differences in the fat, or adipose tissue, of pregnant people with and without GDM. Although increases in fat mass are normal during pregnancy, people with GDM had larger fat cells surrounding their organs, and, according to genetic assays, lower expression of certain genes involved in insulin signaling in their fat tissue than did pregnant people without GDM. The researchers wondered if there might be a link between fat remodeling during pregnancy and the development of insulin resistance. 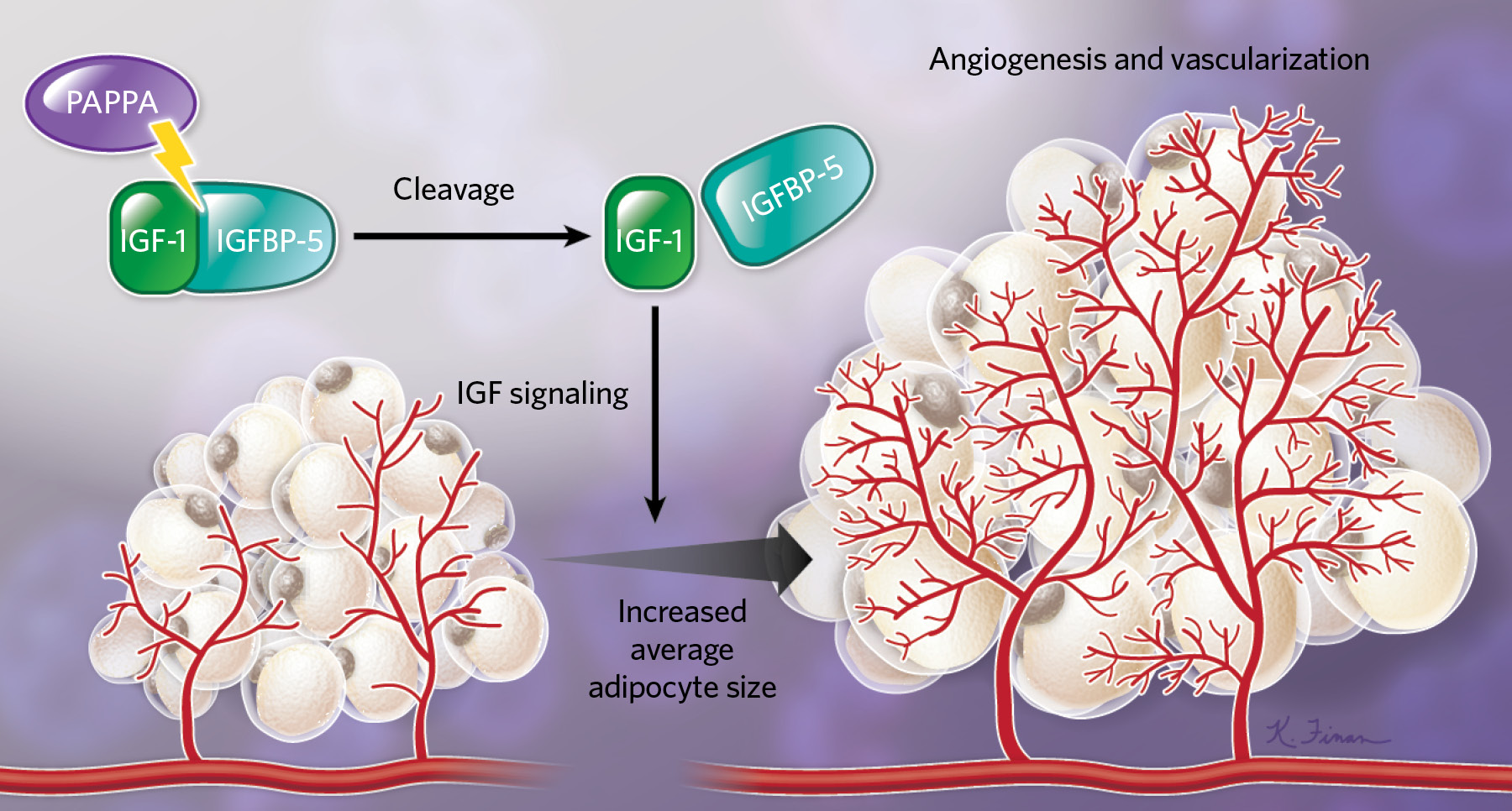 SIGNAL BOOST: Pregnancy triggers a remodeling of fat tissue, according to findings from researchers at the University of Massachusetts. In the team’s proposed mechanism, pregnancy-associated plasma protein A (PAPPA), which is produced in the placenta and elsewhere in a pregnant person’s body, acts on insulin-like growth factor binding protein-5 (IGFBP-5), freeing up the insulin-like growth factor-1 (IGF-1) that typically binds to it. IGF-1 signaling subsequently triggers fat remodeling, including the expansion of blood vessels (angiogenesis) into the tissue (vascularization). These changes are likely to be important for maintaining insulin-driven regulation of glucose levels in the blood, the researchers conclude, although the mechanism for this is not clear.
WEB | PDF
© KELLY FINAN

To investigate, they focused on pregnancy-associated plasma protein A (PAPPA), which is produced mainly by the placenta and helps regulate insulin signaling and increases in the blood throughout pregnancy. In vitro assays revealed that PAPPA plays a role in remodeling human fat tissue and promotes vascularization. Compared with pregnant wildtype mice, pregnant mice lacking PAPPA had more fat around their livers and reduced insulin sensitivity, Rojas-Rodriguez says.

The researchers also examined hospital data from 6,361 pregnant people who took PAPPA tests (the protein is also used to diagnose fetal aneuploidy) in the first trimester and glucose tests in the third. The team found that, even when controlling for BMI and age, low PAPPA was associated with elevated GDM risk, suggesting the protein may protect against the condition.

The University of Southern California’s Thomas Buchanan, who was not involved in the study, says the findings offer new insight into adipose tissue remodeling during pregnancy and into the role of PAPPA. He says the relationship between PAPPA levels and GDM is unclear because there may be confounding factors influencing a person’s GDM risk that aren’t captured in this study, and because the PAPPA-knockout mice don’t recapitulate all the characteristics of human pregnancy. For example, although the knockouts showed reduced insulin sensitivity compared with wildtypes, they paradoxically had enhanced glucose tolerance.

Corvera says that this seems to be because muscle tissue in these mice consumed unusually large volumes of glucose. “We don’t know why,” she says. “It may be that the mice are moving more.” Tissue-specific knockouts could help narrow in on what’s happening where, she adds. Rojas-Rodriguez, now a postdoc at Tufts University, says the team would like to measure PAPPA longitudinally during pregnancy and notes that the protein may have use as a biomarker. “Obviously this will need more studies,” she says, “but there is a potential of this protease to be used in the diagnosis of gestational diabetes.”