Cells migrating as a group play an important role in early development, tissue repair, and some cancers, but the mechanisms by which close-knit gangs of cells find their way to a new location are not clear. Previous work has suggested that cells migrate as individuals, their coherence a result of each responding to the same signals.

But Nicolas David and colleagues at the Institute of Biology of the École Normale Supérieure in Paris were not convinced. They used single-cell transplants in zebrafish embryos to demonstrate that migratory cells can only orient properly when in contact with the endogenous group, suggesting that directional information is contained within the group and shared through cell-cell contacts, rather than provided by external cues.

However, if that were the case, a single plate cell should be able to migrate alone. But when the team transplanted individual plate cells extracted from another zebrafish embryo to a position slightly ahead of the moving cluster, the results were striking: the isolated cells did not migrate toward the animal pole, but rather stayed in position or moved back toward the group. “Cell transplanting [is] a really cool technique, and the authors used [it] effectively,” says Soichiro Yamada, a biomedical engineer at the University of California, Davis.

By analyzing the solo cells’ actin dynamics, the researchers found that although the cells were still polarized and motile, their cytoplasmic protrusions were not oriented properly. Poleward travel was only restored on contact with the main cell mass of the plate. “This suggests that it’s a true collective process; the cells need their neighbors to migrate,” says David. The team also showed that polarity and protrusion orientation rely on the adhesion molecule E-cadherin, as well as on intracellular Wnt-PCP and Rac1 signaling.

When the researchers transplanted small groups of at least five cells ahead of the prechordal plate, they also lacked direction until they made contact with the larger mass, showing that having a few neighbors still isn’t enough to create poleward movement. Instead, the cells need a directional signal that appears to be intrinsic to the main cell cluster, says David, though “we don’t know the nature of this directional information.”

Whatever the nature of the signal, David says that it may explain how some cancer cells collectively invade tissues that are not providing cues to attract them. 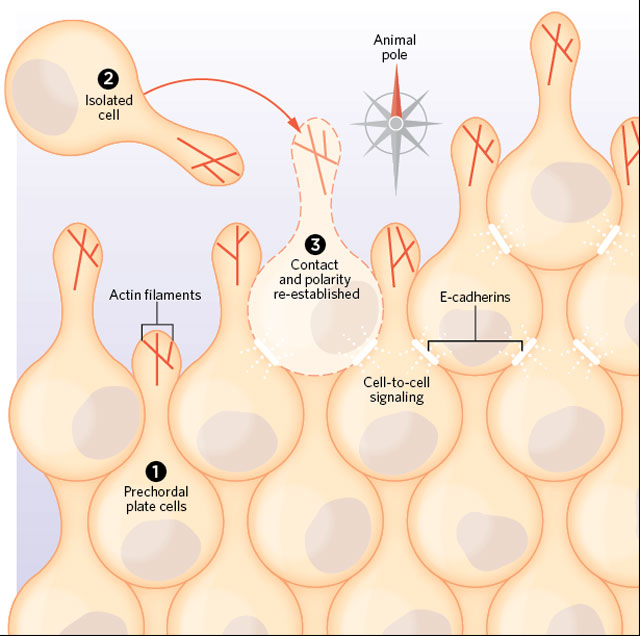 TOUCHY BUSINESS: During development, all prechordal plate cells, including those at the back of the group, move toward the animal pole with the same speed and direction (1), and all emit cytoplasmic extensions. Cells transplanted ahead of the group continued to polarize and generate protrusions, but lost orientation (2), staying in position or moving back toward the main plate. When the isolated cells came into contact with the group again, direction was restored (3), suggesting that directional information is somehow intrinsic to the group rather than to individual cells, and is reliant on cell-cell signalling.LUCY READING-IKKANDA