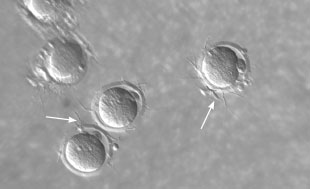 The background
Embryos formed by in vitro fertilization (IVF) experience very different early conditions from naturally conceived embryos. In previous studies, Paolo Rinaudo of the University of California, San Francisco, and colleagues observed that IVF-conceived female mice were more insulin resistant and metabolized glucose poorly compared to normally conceived females, and that IVF mice of both sexes showed altered gene expression, which led them to wonder what might cause such lasting metabolic and transcriptional changes.

The result
Across tissues, the researchers observed many differences in metabolite levels between the IVF and natural cohorts, although they failed to find a distinctive “IVF fingerprint,” says Rinaudo. The normal sex disparities in fat metabolites shrank among the IVF mice, while in liver tissue the disparity was exaggerated. Fat tissue from IVF females also showed greater signs of oxidative stress. These alterations in metabolism and in underlying gene expression could play a role in the dysfunctional glucose metabolism and insulin resistance observed previously in mice, Rinaudo suspects.

The view ahead
The results suggest that the genome of IVF-conceived embryos “is utilized in a very different way, which translates into [their later] ability to handle metabolic changes,” says reproductive biologist Mark Green of the University of Melbourne in Australia. The big question, says Rinaudo, is “to discover if what happens in animals is true in human children.”