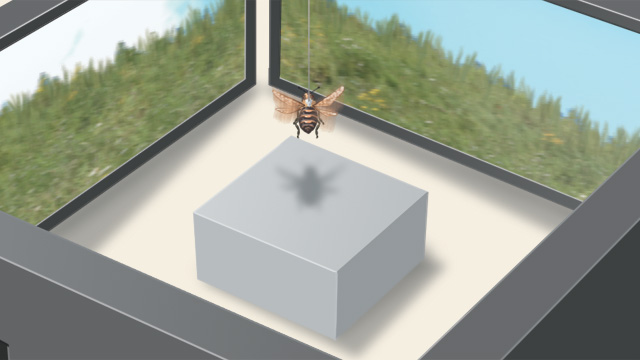 When Tien Luu joined Mandyam Srinivasan’s lab at the University of Queensland to study how honeybees navigate, she soon came up against a fundamental problem—how to observe bees while they’re flying. “It’s very hard to hold a camera chasing them!” she says. So she got together with some roboticists and programmers and built a simple virtual reality system: a bee flight simulator.

In the center of four standard LCD monitors arranged in a square, Luu suspended a single honeybee from a piece of wire, facing one corner. The wire was attached to the bee’s back using nontoxic dental glue that can be removed at the end of the experiment. But hanging from a wire isn’t a natural state for a bee, and Luu wondered, “What do I do to make them fly?” To her surprise, when she nudged them gently they flapped their wings and tried to...

Luu found that when she played simulations on the monitors of things moving by as they would in forward flight, the bee started flying. “I thought, ‘Oh, that’s pretty cool!’” Luu says. “Seeing is believing” for the bees, she adds, and “as long as they perceive the world is moving, they actually move with the world.” The basic flight-simulator program represents the inside of a tunnel, with moving red and white stripes. When Luu runs the program so that the stripes go past relatively slowly, the bee flaps its wings but keeps its abdomen lowered. But once the program speeds up, the bee tucks its legs in and raises its abdomen in the so-called stream-lining response it uses when flying at speed.

The real power of Luu’s bee simulator is that it will allow neurobiological study techniques to be applied to “flying” bees. Lars Chittka at Queen Mary, University of London, says that while bees are “the masterminds, the intellectuals of the insect world” in terms of visual learning, it has only been possible to study their neurological response to olfactory stimuli, because immobilized bees do not respond naturally to visual stimuli. The “interesting thing,” according to Chittka, is that there’s now a way to keep the bees in one place while allowing them to respond “in a meaningful way” to purely visual stimuli, as demonstrated by the streamlining response.

Luu plans to do just that. By putting images of real-life objects in the simulation programs and inserting electrodes into bees’ brains to record neurons firing, she hopes to find out whether bees “know their place in the world,” and how they learn to navigate from hive to flower and back again.