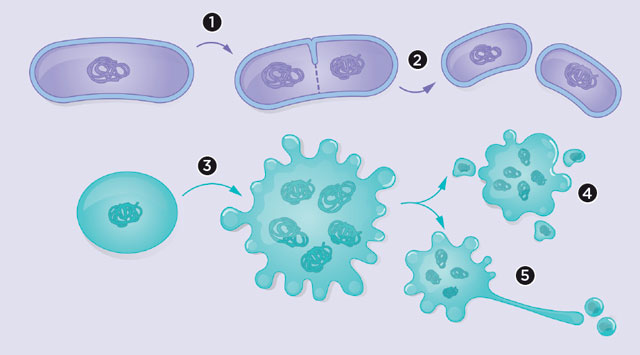 PINCH HITTING: When a walled Bacillus subtilis cell divides, complicated cellular machinery segregates its contents and builds a new peptidoglycan wall across its center (1) before the bacterium splits into two daughter cells (2). L-form bacteria, which don’t have cell walls, dispense with the normal replication methods, at least in some cases. Instead, L-forms produce extra cell membrane and extra chromosomes and become large and irregularly shaped (3). Biomechanical forces cause smaller cells to break off through blebbing (4) or tubulation (5).LUCY READING-IKKANDA

Bacterial cells usually divide in an orderly fashion, building new cell walls across their centers before they separate. But recent research suggests that cell division for bacterial L-forms, which lack a cell wall, is a haphazard affair—possibly more reminiscent of primitive cell...

Many bacterial species, ranging from the harmless soil bacterium Bacillus subtilis to the pathogenic Listeria monocytogenes, have L-forms. They are pared-down versions of ordinary cells of their species, containing nearly the same genes but lacking the exterior peptidoglycan coating that is a defining bacterial trait.

Jeff Errington, a cell and molecular biologist at Newcastle University in the U.K., initially turned to L-form bacteria several years ago as a simpler model for studying cell division in bacteria. In particular, he wanted to understand the role of cytoskeletal proteins in helping the cell membrane constrict during division. Instead, “what we realized is that they don’t use that machinery at all,” he said.

In a 2009 study, Errington and colleagues showed that they could create proliferating B. subtilis L-forms by turning off genes important for cell-wall synthesis and introducing a single mutation in a gene called IspA, a mutation that appeared to protect the cell from death in the absence of its wall (Nature, 457:849-54).

In a new study of the genes involved, the researchers depleted the bacterium’s cell wall enzymatically, without altering the genome—except for introducing the protective IspA mutation. Most cells failed to grow, but one cell reproduced both in the walled and L-form states, and the scientists sequenced its genome to fish for the gene mutations responsible for its survival. One mutation, located upstream of the genes AccA and AccD, which are involved in fatty-acid synthesis, caused cells to grow excess lipid membrane. As the ratio of membrane area to cell volume rose, the investigators hypothesized, biomechanical forces caused parts of the cell to shear off into progeny, taking with them copies of the complete genome that L-form cells have in reserve.

This uncomplicated reproduction process reminded Errington of the lipid vesicle experiments biologists perform to study the origins of life. L-forms’ division supports the idea that primitive cells could have divided without evolving the intricate processes most cells rely on today. “This may resemble the mechanisms that [were] there before a more stable cell wall,” said Martin Loessner, a microbiologist at the Swiss Federal Institute of Technology, who also studies L-forms. But he adds that L-forms of various species may have different reproduction strategies—dividing symmetrically, forming vesicle “daughter cells” in their interiors and then releasing them, or even using limited cellular division machinery.

Errington is also interested in studying the role that these primitive forms could play in disease and antibiotic resistance. Antibiotics that attack the cell wall can cause bacteria to convert into L-forms, and Errington suspects this conversion could provide a temporary escape hatch for pathogens, allowing them to dodge drugs and the immune system. It’s a problem that’s “very interesting and potentially important” to medicine, he says. 