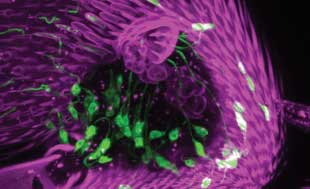 Muggy mystique
Scientists have known for decades that insects can sense their environment’s humidity. Fruit flies, for instance, have distinct relative humidity (RH) preferences: a recent study led by Marco Gallio of Northwestern University and Marcus Stensmyr of Lund University showed that a species from the Sonoran desert seeks out drier conditions, whereas an afrotropical species likes it muggy. The next step was to find out how the flies detect RH.

Sultry behavior
Humidity sensing is thought to occur in the antennae, so the team looked for ionotropic receptors expressed there whose function was unknown. Using mutants and RNAi to disrupt the functioning of any of three such receptors—IR25a, IR93a, and IR40a—the scientists could abolish humidity preferences in their flies. While IR25a and IR93a helped fruit flies respond to temperature as well as RH, disruption of IR40a only affected humidity responses.

Model of perception
The receptors are present on neurons tucked into poreless structures called sensilla located in an invagination of each antenna. Gallio suspects that sensilla change shape in response to RH. Mechanosensory neurons might then detect that signal, enabling the fly to respond to dampness.

Two senses
Jing Wang of the University of California, San Diego, says the results suggest insects might integrate temperature and humidity perception to assess their surroundings. Both humidity- and temperature-sensing neurons reside in sensilla, and “because [the neurons] share the same environment, they have the potential to interact,” Wang says.

Editor's Note (September 7, 2016): The story has been updated to include Marcus Stensmyr's collaboration in the study. 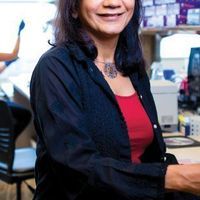 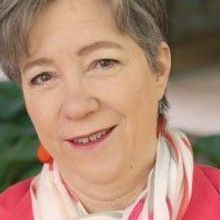