INTRUDER ALERT: Buds growing from under the bark in a yew tree (1) split the wood open down to the vascular tissue, allowing pathogenic fungi (red) to enter. Endophytic fungi (blue) grow towards the crack to combat the invasion (2). The pathogen gives off chloromethane (red cloud) as it starts to decay the surrounding wood (3). This induces the endophytes to release hydrophobic spheres (gray balls) containing the antifungal chemical Taxol. The chloromethane encounters the spheres and causes the Taxol to be released (blue spray), killing the pathogenic fungi (4). The hydrophobic spheres also accumulate and seal up the crack to prevent future infection (5).
View image larger: JPG© LISA CLARK

To find out more, Soliman and Raizada stepped out of the lab and into the woods, sampling yews from the university’s arboretum. They knew the endophytic fungus grew in the plant’s vascular system, but DNA and microscopy analyses revealed that it also accumulated where branches emerged from the tree trunk.

When new yew branches start growing, they cause a deep crack in the wood, breaching vascular tissue. “It’s a dumb mechanism,” leaving the plant vulnerable to pathogens, says Raizada. But the endophyte’s presence suggested it might not be so dumb after all.

Raizada’s team most recently found that Taxol-filled spheres aggregated outside the endophytic fungi at these wood cracks, forming a barrier that sealed off the vascular system. To see whether Paraconiothyrium could detect and affect pathogens, the researchers grew the endophyte and a wood-decaying fungus together. The endophyte released its Taxol-containing hydrophobic bodies near points of contact, inhibiting the pathogen’s growth. The researchers also injected one-year-old yew seedlings with a fungicide to kill the endophyte; these seedlings later succumbed when inoculated with a pathogen, which control seedlings resisted. “That experiment showed, sure enough, that the endophyte protects against the pathogen in the plant,” says Raizada.

James White, a plant pathologist at Rutgers University, says the result “fits one of the hypotheses regarding endophytic microbes—that in some cases they are defenses, bodyguards for the host.” Raizada points out that plant cells are immobile. With an endophytic fungus, he speculates, the plant gets a mobile immune system in exchange for nutrients.

To identify a trigger for Taxol release, the researchers exposed the endophytic fungus to a gaseous compound called chloromethane that pathogenic fungi produce during wood decay. The compound upregulated Taxol production and the expression of genes responsible for exocytosis. Chloromethane also acted as a solvent to pull the Taxol out of its sequestration.

“The localization of the Taxol in these bodies, and the fact that they proliferate and are released in a very targeted way against these pathogenic fungi, was pretty amazing,” says Keith Clay, an ecologist at Indiana University. “It seems like one of the most dramatic cases that I’m familiar with where an endophyte associated with a plant is producing these bioactive compounds in such a precise way.” 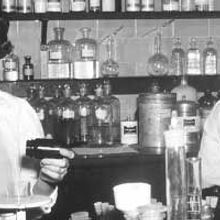