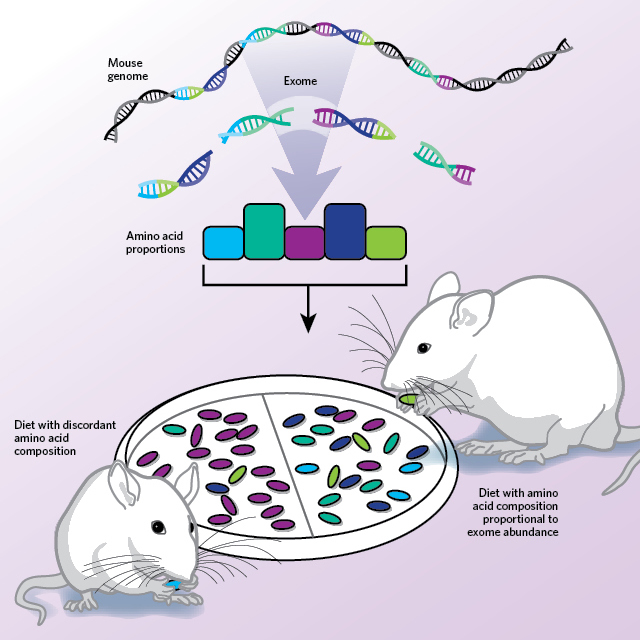 DNA-TO-DISH RECIPE: To generate diets with species-specific proportions of amino acids, first sequence all the protein-coding regions (the exome) from an organism’s genome and determine the precise proportion of each of the 20 encoded amino acids (five of the 20 are shown as colored codons in DNA, with their respective abundances displayed in the bar chart). Next, mix amino acids at this exact ratio with other nutrients (carbohydrates, lipids, and so on) and serve. Animals on this exome-matched diet will grow larger than those on equivalent diets that have discordant amino acid compositions.© KIMBERLY BATTISTA

Animal studies indicate that while calorie restriction prolongs life, a protein-rich diet can shorten it, even if overall calories...

Piper and colleagues had previously found that tinkering with the proportions of certain amino acids in the diet of fruit flies could somewhat redress this fecundity-longevity imbalance. And this led Piper to ask if it would be possible to construct a diet that enhances both fecundity and longevity.

In a moment of inspiration, Piper considered that the recipe for balanced amino acid consumption might be written in the genes—specifically, in the protein-coding exome. To test his theory, Piper designed a diet for fruit flies in which the amino acid component precisely reflected the proportional abundance of each amino acid specified by the insect’s exome. He then compared the behavior and physiology of flies on this exome-matched diet to those eating diets that were equivalent in calories and nutrient proportions but not in amino acid ratios.

This is “innovative and important” work, says Andrzej Bartke of Southern Illinois University. “[It] show[s] that genetic information predicts the utilization of amino acids by an organism, and that you can therefore design a diet based on the organism’s genes.”

Furthermore, Bartke adds, “most of the fundamental mechanisms linking nutrients to growth, reproduction, and aging are remarkably similar in widely different species. It is therefore very reasonable to expect that these findings are relevant to human nutrition.”

That said, Piper hastens to point out that the animals in the study were kept in a temperature- and humidity-controlled infection-free environment. “What we’re looking into now is whether [the results are] relevant outside of lab conditions,” he says.

Even if such exome-tailored diets are not applicable, or desirable, for humans, says James Mitchell of Harvard T.H. Chan School of Public Health, “there’s a huge interest for industrial animal husbandry” where the goal is to maximize growth and, in the case of chickens, egg-laying, “but also to save money on the feed.”