Hee-Gyeong Yi was a new graduate student in Dong-Woo Cho’s group at Pohang University of Science and Technology (POSTECH) in South Korea in 2012 when she came upon a study that had used three-dimensional scaffolds to build models of oral tumors. If arranging cells in a particular formation was a good way to build cancer models that mimic what’s going on in the body, Yi, who had been working on 3-D printing of cartilage cells at the time, thought: “Why not print cancer?” 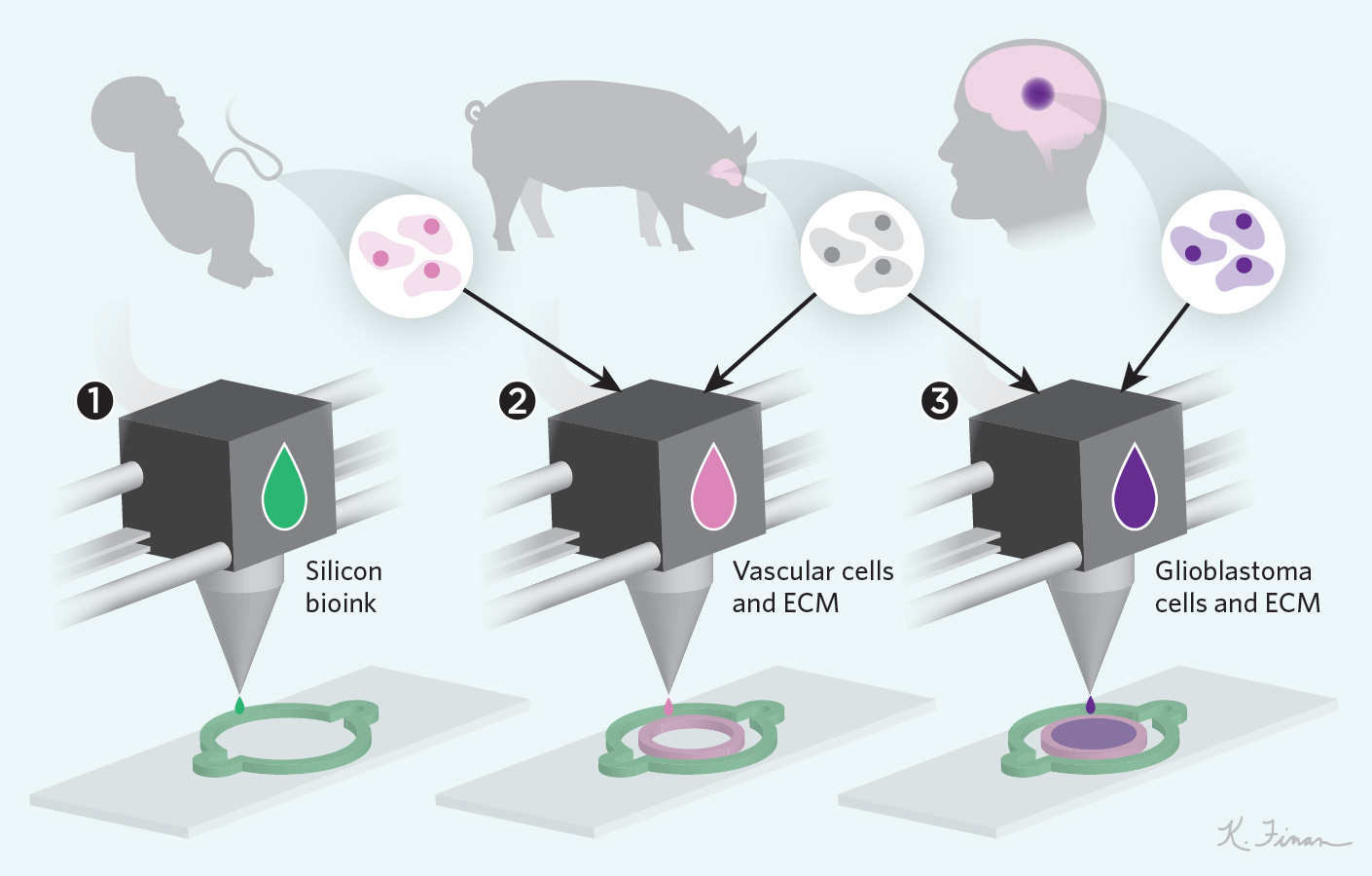 PRINTING GLIOBLASTOMA: A chamber wall is printed with silicon-based bioink on a sterile glass slide (1). Within this chamber, a mixture of human vascular cells derived from umbilical...

She discussed the idea with fellow Cho lab members, then approached group collaborator Sun Ha Paek, a neurosurgeon at Seoul National University College of Medicine who proposed using glioblastoma (GBM) to test the idea. “[GBM] patients suffer from the extraordinarily aggressive and rapid progression of the disease, and reactions to anti-cancer treatments often vary from patient to patient,” Yi, now at Seoul National University Medical Research Center, tells The Scientist in an email. There is a great need to test potential treatments before they are given to individual patients, she adds—something that could perhaps be done using a 3-D–printed tumor on a chip.

The researchers set to work creating three bioinks to load into a 3-D printer. The first contained a mix of decellularized extracellular matrix (ECM) from a pig’s brain and GBM cells from one of seven of Paek’s patients whose tumors had been surgically removed; the second contained pig brain ECM and human vascular cells; and the third was a silicone-based ink. The researchers then programmed the printer to lay down the bioinks on a sterile slide with the cancer cells in the middle of a ring of vascular cells, all nested within a silicone chamber—a design intended to recapitulate the in vivo cancer environment.

It’s a variation on existing tumor organoids, with the advantage of incorporating diverse cell types, says Justin Stebbing, an oncologist and cancer researcher at Imperial College London who was not involved in the research.

Traditional organoids are spheroid models that typically lack the host cells found in the tumor microenvironment. (See “Digital DNA Detection” on page 17.) In the GBMs-on-chips, the tumor cells are surrounded by vascularized stroma, and Yi and her colleagues are now working on using the 3-D printing approach to add immune cells as well. The ability to put multiple cell types on the same chip is “really important,” Stebbing says.

After the GBMs-on-chips incubated in culture media for a week, Yi and her colleagues exposed them to radiation and the chemotherapy drug temozolomide, treatments the patient donors had undergone. The research team found that lower survival of tumor and vascular cells in the GBM-on-a-chip model correlated with longer survival of the patients who received similar treatments. Moreover, the GBMs-on-chips responded to other treatments as would be predicted based on the cancer’s genotype, further validating the models’ biomimetic accuracy.

“The data they showed in GBM is really good,” says Stebbing. While there is still more development and validation to be done, “what’s next could be huge,” he adds. The printed model holds potential to “really personalize the treatment.”