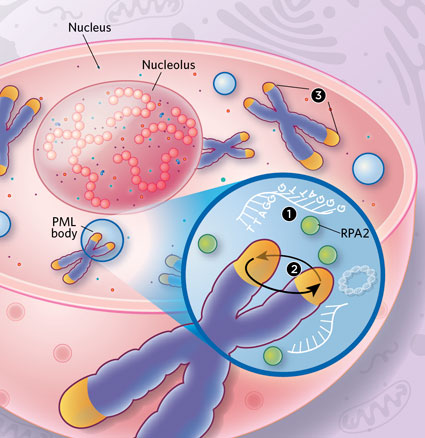 TRIGGERING ALT: Knocking down ASF1 launches cells into the alternative lengthening of telomeres (ALT) response. Replication protein A2 (RPA2) appears in promyelocytic leukemia (PML) bodies, as do repeats of linear and circular telomeric DNA with the sequence TTAGGG (1). Also in ALT, telomere recombination is associated with PML bodies (2) and the length of telomeres becomes more variable (3).

Cancer cell immortality hinges on telomeres, the caps of repetitive DNA that protect the ends of chromosomes. Every time a normal cell divides, its telomeres shorten, and eventually the cell’s telomeres are so short that it stops dividing or self-destructs. Most cancer cells can divide indefinitely because they upregulate telomerase—an enzyme that lengthens telomeres—but 5 to 15 percent of...

One of the hallmarks of ALT is the accumulation of replication protein A2 (RPA2) in specialized areas of the nucleus called promyelocytic leukemia (PML) bodies, named after the tumor suppressor protein that is one of their key constituents. The mechanism for this event is still unclear, and no one knows how ALT is triggered in cancer cells. To gain some insight, Jan Karlseder of the Salk Institute for Biological Studies in La Jolla, California, and colleagues turned to two proteins called ASF1a and ASF1b, histone chaperones involved in both replication-coupled and replication-independent nucleosome assembly. Other researchers had already shown that knocking down ASF1 leads to the accumulation of RPA2 in PML bodies.

Karlseder’s team treated multiple human cell lines with short interfering RNA to knock down ASF1. Within three days, all the telltale signs of ALT appeared. The researchers saw structural changes in the cells’ chromatin and observed the presence of RPA2, and of extrachromasomal DNA with a repeated telomeric sequence, in PML bodies. ASF1 depletion also led to the increased recombination of telomeres—one of the main telomere maintenance mechanisms used in ALT—as well as to an increase in the variability of telomeres’ lengths and a decrease in the expression of the catalytic subunit of telomerase.

“What the authors have done is to discover a tool that allows them to switch ALT on, which is something we’ve never had before,” says Roger Reddel of the Children’s Medical Research Institute in Sydney, Australia, who was not involved in the work.

While the method is extremely useful, it likely does not represent what happens naturally in cells, as ASF1a and ASF1b are necessary for viability and proliferation. “Nevertheless, these are proteins which are involved in shaping the chromatin at the telomere,” Reddel says, “so what they’ve uncovered is that if you perturb the chromatin you can get ALT switched on.” While experts had long speculated that chromatin structure could influence ALT, based on evidence for the involvement of other chromatin-modifying proteins, it had not been confirmed experimentally.

In the future, Karlseder will knock down ASF1 in more cell lines and eventually in animals in order to unravel ALT pathway regulation. “If we are ever to successfully target telomere length or telomerase in cancer therapy, we also need to understand ALT, and we need to be able to inhibit the ALT pathway,” he says. “I think we have a tool now where we can start developing inhibitors of the pathway, and where we can understand the pathway in detail.”