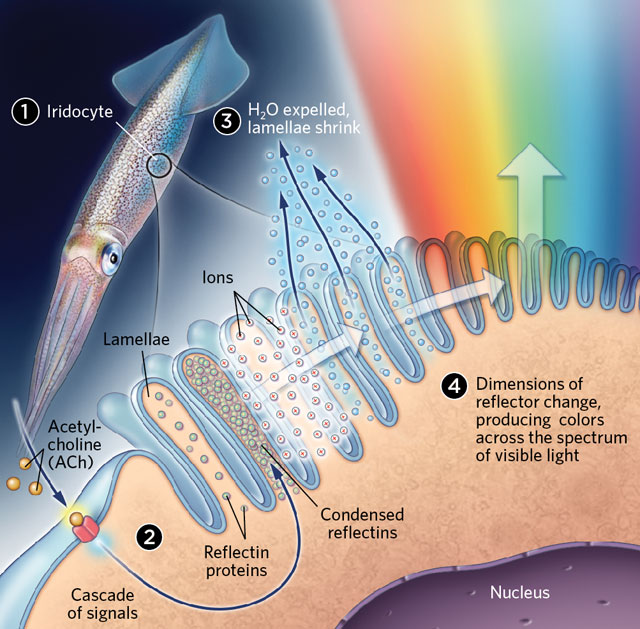 LET THERE BE COLOR: Iridocyte membranes consist of lots of tightly packed parallel folds, creating numerous extracellular channels between lamellae containing reflectin proteins (1). The neurotransmitter ACh activates a cascade of signals in the cell that results in reflectin condensation, making the membrane reflective and iridescent (2). Ions released by the condensation of reflectins cross the membrane into the extracellular space, which in turn drives the expulsion of water from lamellae (3). This shrinks the lamellae, changing the thickness of and spacing between the membrane’s deep grooves to reflect light in a variable way that produces colors (4).© SCOTT LEIGHTONThe paper
D.G. DeMartini et al., “Membrane invaginations facilitate reversible water flux driving tunable iridescence in a dynamic biophotonic system,” PNAS, 110:2552-56, 2013.

From hummingbirds to herring, a dazzling range of animals boast structural color—the brilliant iridescent hues that result not from pigment, but...

In 2010, Daniel Morse of the University of California, Santa Barbara, and colleagues showed that when the neurotransmitter acetylcholine (ACh) binds to a receptor on iridocytes it triggers a cascade of signals that results in the phosphorylation and consequent condensation of reflective proteins called reflectins. This year, Morse and his team took an even closer look at how the iridocytes respond to activation by ACh.

First, they isolated iridocytes from squid (Doryteuthis opalescens) and examined the cells’ surface using a high-resolution scanning electron microscope. To their surprise, they saw that the grooves on the plasma membrane are made up of a series of tightly packed parallel invaginations that penetrate deep into the cell like pleats in a drape. Dissecting away parts of the cell with an ion beam for a clearer view, they found that this infolding of the membrane creates numerous extracellular channels separating fingerlike lamellae filled with reflectins. Other researchers had thought that the membrane formed discrete discs, “like stacked plates,” says Morse.

The squid tunes its color by altering the thickness of the lamellae and of the extracellular channels between them, which changes how the grooves interact with light. Morse and colleagues hypothesized that lamellar thickness might be altered by a rapid inflow or release of water through the cell membrane. To test the idea, they tracked the movement of deuterium oxide, or heavy water, and found that as water was expelled from the lamellae, the cell changed from its initial nonreflective transparent state to red and then progressively through the spectrum to blue.

Morse’s team already knew that the ACh-activated signal cascade causes reflectins in the transparent lamellae to condense, creating a thick gel that renders the grooves reflective. But their latest results have led the researchers to refine this model by proposing that reflectin condensation may result in the release of ions across the cell membrane, which in turn could drive the expulsion of excess water from the lamellae to maintain electroosmotic equilibrium, resulting in further dehydration and condensation. This exchange increases reflectin concentration and shrinks lamellar thickness, enhancing iridescence and allowing dynamic control of the color of reflected light. The process is completely reversible, so the colors can be fine-tuned at will.

“Their proposed mechanism is interesting,” says Roger Hanlon of the Marine Biology Laboratory in Woods Hole, Massachusetts, who works on color-changing cephalopods. And although there are substantial gaps to fill, he adds, the research has “elevated the discussion significantly.” 