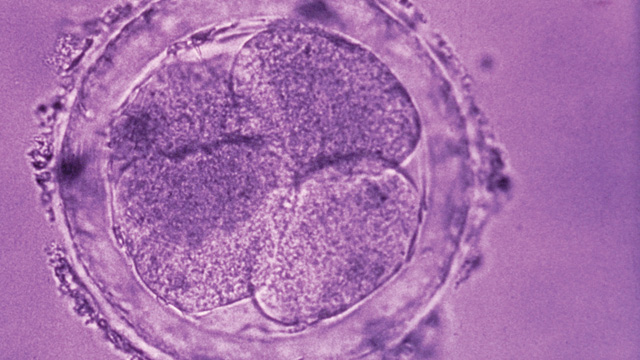 HUMAN EMBRYO: Women may not be limited to the eggs they are born with, as researchers have discovered human ovarian stem cells capable of differentiating into oocytes. PHOTO RESEARCHERS, CLAUDE EDELMANN

Every middle schooler learns that women are born with all the eggs they will ever produce, limiting their options for reproductive treatment. But Jonathan Tilly of Massachusetts General Hospital and colleagues have now isolated germline stem cells from human ovaries that can differentiate into oocytes.

Tilly had previously found ovarian stem cells in mice, but needed to confirm their existence in humans. Using a fluorescent-labeled antibody that binds to a protein expressed on the surface of the germline stem cells but not on oocytes, the researchers isolated...

The in vivo test

The researchers then cultured the human ovarian stem cells, engineered to express GFP as a reporter, in human ovarian tissue and transplanted the two components under the skin of mice. After a few weeks, they located green-glowing eggs flush with oocyte markers, indicating that the signals in ovarian tissue alone could stimulate egg differentiation. “This is really the first convincing evidence of human ovarian stem cells,” which could be a boost for fertility research, said Holly LaVoie, who studies ovary development at the University of South Carolina School of Medicine.