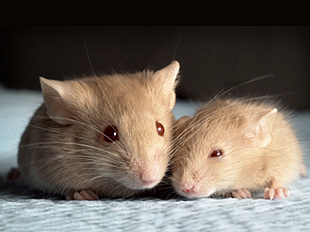 OLD MICE: Ames dwarf mice (above, right) outlive wild-type mice (above, left), but their life span is unresponsive to changes in dietary methionine levels.CHUCK KIMMERLE AT UNIVERSITY OF NORTH DAKOTA

The paradox
Genetic defects in growth-hormone (GH) signaling extend life span in mice, as do diets minimizing the intake of a single amino acid, methionine. Yet scientists had previously observed that the Ames dwarf mouse, deficient in GH, lives longer but has upregulated methionine metabolism. Holly Brown-Borg of the University of North Dakota and her colleagues thus decided to examine how GH genetics and dietary methionine might interact to impact life span.

The diet
Brown-Borg’s team compared four groups of mice on three different diets. Ames dwarf mice, GH-receptor knockout mice, transgenic mice that overexpressed GH, and wild-type controls were fed a diet with an 80 percent reduction, a 50 percent reduction, or a 50 percent increase in typical methionine levels. Methionine restriction extended the life span of the GH transgenic mice and the wild-type controls, but did not impact the life span of the Ames dwarf or GH receptor knockout mice.

The resistance
“Animals that don’t have growth-hormone signaling are unable to respond” to the drop in dietary methionine, says Brown-Borg. Follow- up studies by her group indicate that the altered metabolism of these GH-deficient mice is indifferent to changes in methionine intake. “They really don’t discriminate either metabolically or in terms of life span when compared to other animals,” she says.

The mechanism
Matt Kaeberlein of the University of Washington praises the paper as a “really nice example” of a rare study investigating the interaction of genes and environment in aging, and hopes for a future mechanistic explanation. Brown-Borg speculates that the link might be epigenetic, given DNA-methylating enzymes’ requirement for methionine.