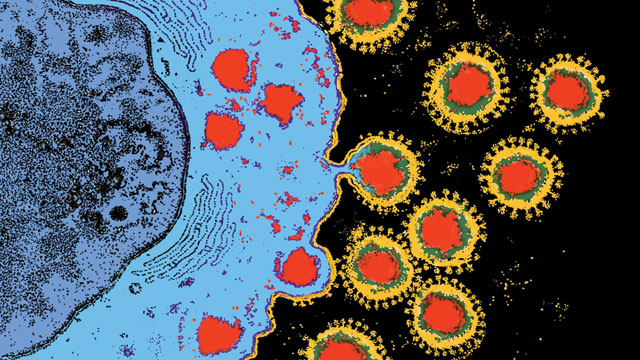 As it is synthesized, eukaryotic messenger RNA (mRNA) is capped with a guanine molecule, and the first nucleotide of the nascent mRNA strand is modified in higher eukaryotes with a 2’-O-methylation. Many viruses infecting eukaryotic cells do the same. Volker Thiel, at Kantonal Hospital St. Gallen in Switzerland, and colleagues have shown that an invading virus uses this modification to hide from the host’s immune system.

Coronavirus bypasses the cell’s type I interferon (IFN) response, which stimulates macrophages and natural killer cells to attack virus-infected cells. How the virus escapes was unclear, but Thiel’s group showed that mutant viruses lacking the cap modification are unable...

Although eukaryotic 2’-O-methylation was discovered 35 years ago, “there was no clue why this modification was made,” Thiel says. It’s now clear that the cell uses it to distinguish between its own and foreign mRNA—a method that fails during coronavirus infection.

Stanley Perlman at the University of Iowa writes in his F1000 evaluation that, since other viruses also cap their mRNA, “it is likely that this mechanism of virus-mediated evasion of the IFN response is widely used by pathogens.” Thiel is now beginning to study what functions other modifications to cap proteins might have.