Bacteria use long, threadlike attachments known as pili to interact with their environments. In some microorganisms, a specific form of the filaments called type IV pili also enable locomotion.

The molecular motors powering type IV pili are some of the strongest found in nature, generating large forces to retract the filaments from a surface, says Alexandre Persat, a biophysicist at the Swiss Federal Institute of Technology in Lausanne. “We were wondering how this is coordinated—whether these pili are used for motility in a random way, or if they synchronize the activity of their motors.” 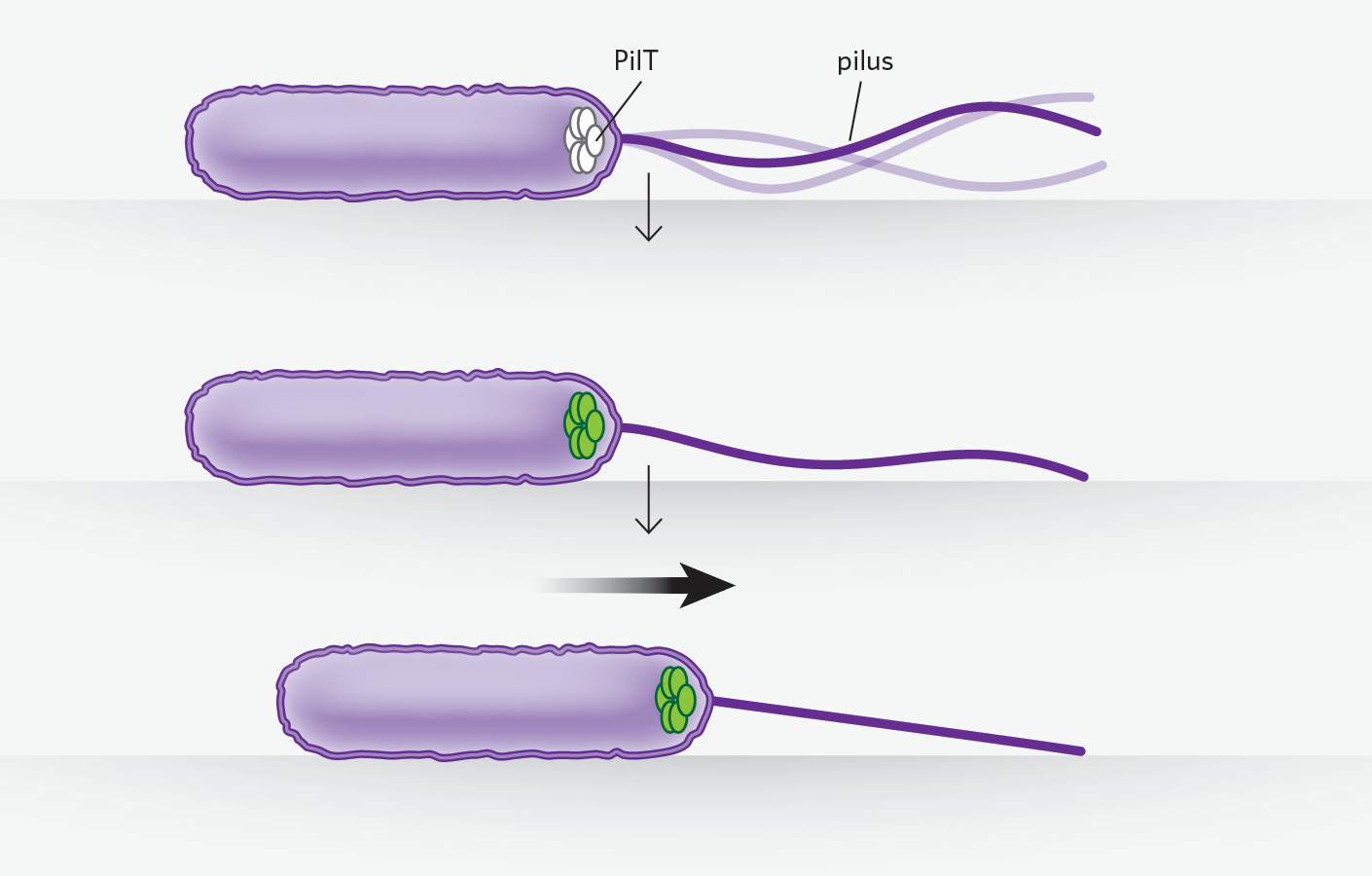 MICROBIAL MOTION: When Pseudomonas aeruginosa’s thread-like pilus touches down on a surface, it activates PilT, a motor that retracts...

Type IV pili movements are rapid, making them tough to see with traditional microscopes. So Persat and his colleagues used interferometric scattering microscopy (iSCAT), a technique recently developed at Oxford University that allows researchers to view the minute structures of live cells without labeling them. The approach, which involves shining a laser on samples and capturing the signal generated by the inter­ference between the scattered light and a reference light, had previously been used to image actin filaments, components of cytoskeletons involved in cell movement. Persat’s team thought iSCAT might work with pili as well.

“It was an amazing method—I think it’ll be transformative,” says Yves Brun, a microbiologist at the University of Montreal who wasn’t involved in the study. “The thing that’s cool about this [technique] is that you don’t need to do any modifications to the pili.”

Using iSCAT to view Pseudomonas aeruginosa, the researchers observed that the type IV pili’s movements—extending, attaching, and retracting—occurred in a synchronized sequence. As soon as the appendages touched down on a surface, motors within the pili activated and pulled on the filament, propelling the cell forward. The microbes’ ability to detect their pili touching down on a surface and to use that as a signal for motion “is reminiscent of what’s happening in locomotion in higher-order organisms,” Persat says, such as humans’ ability to use several sensory signals to coordinate our movements.

“The fact that the tip attaches and the bacteria seem to be able to respond to that event by engaging the motor is kind of cool,” says Lori Burrows, a microbiologist at McMaster University in Canada who did not take part in the work. But how, exactly, attachment at one end of the pilus engages motors on the other is still a mystery.

Burrows notes that one possible mechanism involves a sensory system in the membrane of type IV pili. Her team previously reported that sensors within the pili membrane can detect the unraveling of its subunits, which happens when microbes attach to a surface.

Persat plans to address this question in future work. He adds that understanding the internal communication mechanism could have health applications down the road. For example, P. aeruginosa, which infect both plants and animals, are known to use their “sense of touch” to help regulate genes involved in pathogenicity—so by further probing this process, scientists could devise ways to interfere with it. “Hopefully we can . . . develop some treatments against Pseudomonas aeruginosa or other systems,” Persat says. “That’s the dream.”