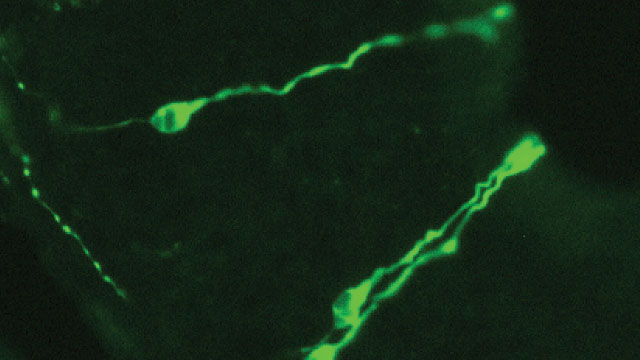 Suspicious Similarities
Proteins known as formyl peptide receptors (FPRs) on the surface of immune cells are involved in detecting signs of infection. Previously, Ivan Rodriguez of the University of Geneva and colleagues had found that FPR-like receptors on the surface of neurons in the olfactory system of rodents can trigger the cells’ activation, but it wasn’t clear how immune proteins had evolved to sense smell.

Rodent Innovation
By comparing the genomes of multiple mammal species, the researchers homed in on several events involved in the coopting of FPRs for olfactory sensing. Twice, a duplicated FPR gene landed near a promoter sequence for vomeronasal receptors; later, the ancestor of most mouse...

Speedy Repeats
These events occurred within the last 30 million years, a relatively short period of time on the evolutionary scale, Rodriguez says. Such speedy evolution is a hallmark of chemical-detecting receptors more generally, notes Duke University’s Hiro Matsunami, who was not involved in the study. The genes for the FPRs are surrounded by many relatively unstable repeat sequences, making them prone to duplications.

Inside Out
Rodriguez’s group is still working to determine just what the immune system receptors are doing in the nose, but he thinks FPRs may underlie rodents’ ability to detect illness in their compatriots. Regardless, Matsunami points out that the immune and olfactory systems share a common goal: to survey the environment—whether internal or external—for signs of danger. “They end up using the same kind of genes for their common purposes.”