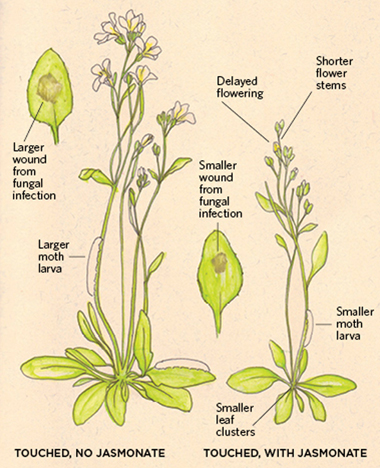 PROTECTIVE TOUCH: After 4 weeks of being gently bent back and forth 10 times, twice a day, Arabidopsis plants unable to produce the hormone jasmonate exhibited normal growth (left), while the plants that could produce jasmonate when touched had delayed flowering, shorter flower stems, and smaller leaf clusters (right). Plants that were touched also had smaller wounds from a fungal infection, and moth larvae that fed on touched plants did not grow as large.© JOELLE BOLT

Although it’s known that plants can detect and respond to touch, how they relay information from physical contact has been less clear. Janet Braam’s group at Rice University and other labs had previously shown that the expression levels of many genes are upregulated in response to touch and that plants develop stockier builds if they are routinely perturbed. In their latest work, Braam’s team set out to identify how the physical perturbation was translated into growth changes. They found that a plant hormone called jasmonate is essential for the developmental responses to touch in Arabidopsis, and that touch itself, via jasmonate, can boost pest resistance.

Given jasmonate’s already-established roles in responding to light, injury, and pests, the addition of touch “means that what we’re looking at is different ways that signal inputs are being integrated,” says John Turner, a professor at the University of East Anglia, who was not involved in the study.

A member of Braam’s team recognized that many of the genes upregulated in response to touch are also upregulated after wounding—a response known to be mediated by jasmonate signaling—leading the group to scrutinize the role of the hormone in touch as well. The researchers grew plants that were unable to produce jasmonate. After 4 weeks of gently bending the plants back and forth 10 times, twice a day, the researchers found that plants that didn’t produce jasmonate continued to grow normally, while the plants that produced jasmonate when touched had delayed flowering, shorter flower stems, and smaller leaf clusters. Braam says her group is looking at how these responses might affect crop plants.

Knowing that jasmonate is also involved in plant defenses, Braam’s group tested whether touching might also affect how well plants can ward off attackers. Indeed, plants that were touched had smaller wounds from a fungal infection, and moth larvae that fed on touched plants did not grow as large. When the researchers grew mutant plants that constantly produced jasmonate, the plants were more resistant to pests even if untouched.

Braam says the finding could have commercial applications, and her group is looking to see whether simple touch can enhance pest resistance in crops. However, it’s still unclear whether pest protection comes at a price, since the jasmonate-producing plants were stunted in growth compared to those that were jasmonate-deficient.

Braam’s findings also highlight that plants are more responsive to their environment than had been expected. “They can perceive quite diverse stimuli and quite complex changes to the environment and can respond dynamically,” she says. “This happens in a way that’s pretty opaque unless you look at their molecular responses.” There are two big questions that remain unanswered: How do plants actually perceive touch—what are the mechanosensors involved—and what signaling pathway leads to the accumulation of jasmonate in the first place? “That’s where the black box is,” says Turner. 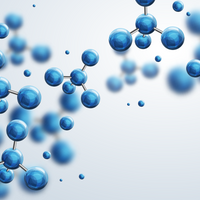