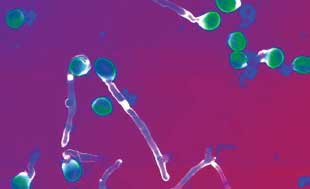 Getting hydrated
When a dry pollen grain first lands on a flower’s stigma, secretions from the flower rehydrate the grain. Eventually, enough inner pressure builds up for the pollen to grow a tube towards the flower’s ovaries. Elizabeth Haswell, a plant molecular biologist at Washington University in Saint Louis, wanted to know how the grain’s cells sense and manage these mechanical changes.

Electrophysiology
Haswell suspected an ion channel was involved, given that membrane tension-sensing channels protect Escherichia coli from taking in too much water. Fluorescent tagging revealed that a related gene, MSL8, was active in Arabidopsis...