As organs go, the heart is an energy hog. To keep it fueled, mitochondria within cardiomyocytes (heart muscle cells) constantly churn out ATP as a product of the citric acid cycle. In the heart, most of the cycle’s substrates come from the metabolism of fatty acids, but the organ can also make use of other compounds such as lactate or ketones.

When Daniel Kelly of Sanford Burnham Prebys Medical Discovery Institute in Orlando, Florida, learned that some rare genetic disorders both cause dysfunction of the heart muscle and simultaneously disrupt fatty acid oxidation and increase ketone metabolism, he wondered if ketones might play a role in heart failure. “It was kind of a genetic proof of concept that these fuel changes might really be important, rather than just innocent bystanders,” he says.

They observed lowered levels of proteins that process fatty acids for energy and increased levels of a ketone-metabolizing enzyme called βOHB dehydrogenase 1 (BDH1). They also found elevated levels of three ketone metabolites, and when the team perfused excised hearts with a radioactively labeled version of the ketone βOHB, hypertrophied hearts ate up more of the ketone to produce substrates for the citric acid cycle than healthy hearts did.

Kenneth Margulies and colleagues at the University of Pennsylvania saw similar metabolic changes in failing human hearts sampled during surgery or removed during cardiac transplantation (Circulation, 133:706-16, 2016). Margulies’s team observed that the expression of the genes for BDH1 and other ketone-metabolizing enzymes ramped up in failing heart tissue. Although failing hearts and healthy controls (from organ donors) displayed no differences in the abundance of proteins involved in fatty acid oxidation, failing ones had lower levels of fatty acid intermediates called acylcarnitines, suggesting the hearts were not using their normal fuel source.

These mice will also be useful in discerning whether the switch to ketones is a good thing. “We don’t know if it’s adaptation or maladaptation,” says Heinrich Taegtmeyer, a cardiologist at the University of Texas Health Science Center in Houston. Figuring that out could potentially inform ways to protect hearts in bad situations. 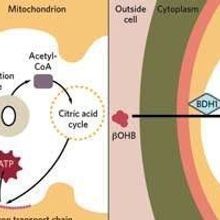