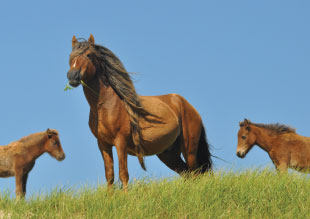 SEA TO LAND: Feral horses on Sable Island, Canada, munch on marram grass that has been enriched with nitrogen from local seal populations. SARAH MEDILL

Island living
Working on Sable Island, Nova Scotia, population ecologist Philip McLoughlin noticed that many of the local feral horses visited a small spit of land on the island’s west coast to eat marram grass and other vegetation. But flicking back through photos of the area, the University of Saskatchewan researcher found that 50 years ago, the spit had been just a strip of sand. “Something had happened since the 1960s to make this an important area for the horses,” he says.

Seal explosion
One thing the team knew had changed was the number of pupping...