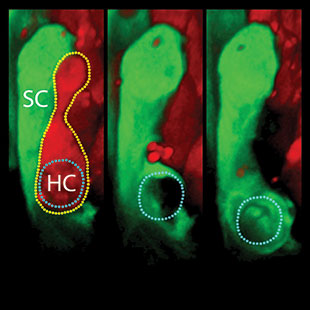 Killer drugs
A number of commonly used medications can cause hearing loss by killing off cochlear hair cells, which translate sound waves into neural activity. To understand how they die, Lisa Cunningham and Elyssa Monzack of the National Institute on Deafness and Other Communication Disorders and colleagues turned to the utricle, a vestibular inner-ear structure involved with balance whose hair cells are very similar to those in the cochlea, which are notoriously resistant to culturing when mature.