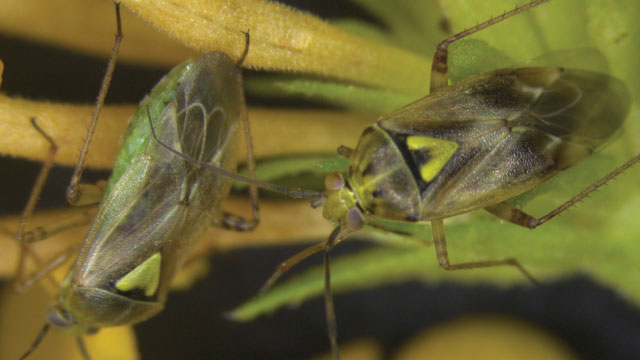 HOW YOU DOIN’?: A male L. hesperus (right) uses its antennae to determine a female’s sexual maturity and mating status.COLIN BRENT

JEALOUS SUITORS
Many male insects deploy “mate-guarding” chemicals that render females unattractive to other males for some time after copulation. The technique gives males’ sperm a competitive edge, but can disadvantage females if the effect lasts too long.

LOVE POTION
In a first, Colin Brent of the US Department of Agriculture’s Arid Land Agricultural Research Center and colleagues stumbled on a female means of fighting back. In the western tarnished plant bug (Lygus hesperus), males’ seminal fluid contains antiaphrodisiac pheromones. Over several days or weeks, females convert one of those compounds to geranylgeraniol, which counteracts the antiaphrodisiacs to reveal that she may, in fact, be ready to mate again. “[They’re] basically competing signals,”...