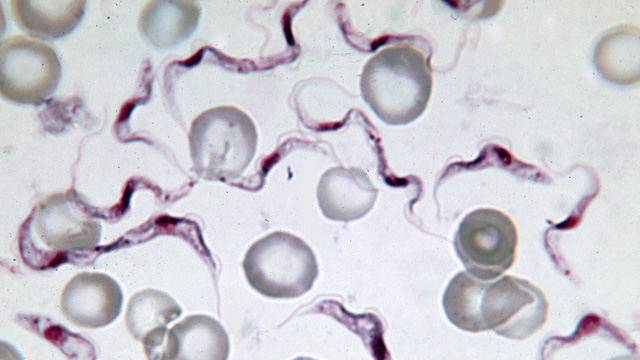 TRYPANOSOMA BRUCEI PROTOZOA: The parasite, shown here in purple, causes sleeping sickness, a disease that starts out as fever and inflammation and progresses to neurological symptoms such as confusion and disrupted sleep cycles, eventually leading to coma and death. WIKIMEDIA COMMONS, ALAN R. WALKER

Horn used a library of plasmids to create around 750,000 T. brucei clones, each with one of the bug’s 7,500 or so genes knocked down using RNAi. He then treated the...

Horn and colleagues also gained insights into how these genes, when knocked down, might work. Out of 8 genes whose disabling conferred resistance to the first-line drug suramin, one encoded a previously unidentified cell-surface receptor, ISG75. When ISG75 was knocked down, the drug could not bind to the pathogen’s cell membrane—evidence of how suramin enters and kills cells through endocytosis.

The paper is important “mainly because we [now] understand better how these drugs work,” said microbiologist Christine Clayton of the University of Heidelberg, which could help researchers design new drugs that bypass the resistance mechanism.