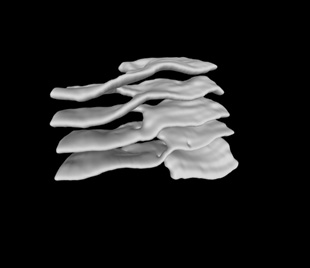 RAMP IT UP: Sheets of endoplasmic reticulum are connected by a twist of membrane such that the entire structure resembles the spiral of a parking garage.CELL, TERASAKI ET AL.

The finding
The endoplasmic reticulum (ER), an organelle composed of interconnected sheets and tubules, is well known as a site of protein synthesis. But the fine structure of its characteristic folds, and in particular how they connect, is poorly understood. Researchers now show that ER sheets in mouse salivary gland and neuronal cells are connected to their neighbors by twists of membrane, and the stack of sheets forms a spirally connected structure resembling a parking garage.

The method
In the past, researchers have tended to look at isolated cross sections of stacked ER. Instead, Mark Terasaki, a cell biologist at the University of Connecticut Health Center, and his colleagues imaged ultrathin, consecutive sections—just 30 to 40 nanometers thick—using a stain that accentuates the membranes. “We saw this motif that repeated itself as it went though the sections,” says Terasaki. “It turned out that when you reconstruct that, it becomes a helix.”

The math
Based on a mathematical model, the researchers concluded that the ER’s spiraling shape is the most energetically efficient way to pack a large number of ER sheets into a small space.

Next steps
Vivek Malhotra, a cell biologist at the Center for Genomic Regulation in Barcelona who was not part of the study, said he was impressed with the resolution of the 3-D reconstructions. “The approach is very powerful, and it will help us [better understand organelle morphology] if applied to other compartments,” he said. He added that there are still uncertainties about the stacked ER, such as how its structure helps carry out protein synthesis, export, and other functions.