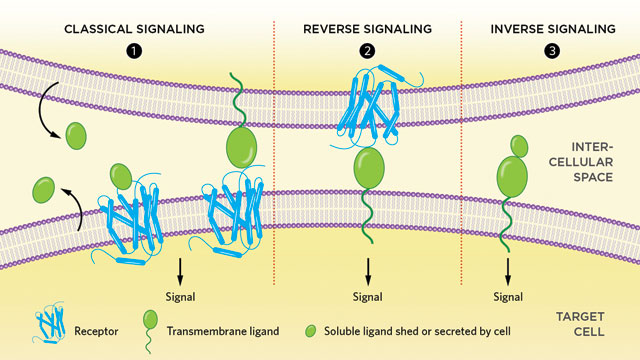 A NEW WAY TO TALK: In classical signaling, receptors (blue) on a target cell transduce an intracellular signal upon binding with transmembrane or soluble ligands, such as chemokines (green; 1), which can originate in another cell or the target cell itself. Signaling triggered by a transmembrane ligand binding to a receptor on another cell is known as reverse signaling (2). In a novel mechanism dubbed inverse signaling, a transmembrane chemokine transduces a signal upon binding with its soluble equivalent (3).THE SCIENTIST STAFF

Kirsten Hattermann knows a thing or two about chemokines. A researcher working with Janka Held-Feindt’s lab at the University of Kiel in Germany, Hattermann has spent the last decade studying these little proteins, which bind—either as transmembrane (tm...

Recently, while investigating chemokine signaling in tumor cells from a variety of human cancers, Hattermann and her colleagues found something they couldn’t explain. When they exposed glioma and carcinoma cells lacking known chemokine receptors to the soluble form of the chemokines CXCL16 and fractalkine, the researchers assumed there would be no binding and, hence, no signal transduction. But to their surprise, Hattermann says, “we observed intracellular signaling.”

Because “it is known that chemokines are receptor-promiscuous,” explains Hattermann, “at first we were searching for another receptor.”

But after noticing that a line of receptor-negative melanoma cells didn’t respond to the s-chemokines, the team began looking for differences in membrane protein composition between these cells and the responsive ones. “These [melanoma] cells lacked transmembrane chemokines,” Hattermann says. “That was the first hint that the transmembrane chemokines might be critical.”

Using immuno-electron microscopy, the researchers showed that s-CXCL16 and s-fractalkine directly bind to their transmembrane equivalents, implicating tm-chemokines as the elusive signal transducers. “If it’s correct, it’s paradigm-shifting in terms of the way we understand how some of these molecules work,” says Gerry Graham, a professor of molecular and structural immunology at the University of Glasgow. “Binding of a soluble [chemokine] to a membrane-anchored one to transduce a signal is completely new.”

Graham says more experiments, both in vitro and in vivo, will be essential. “I think there’s a lot to be done in terms of defining [the mechanism’s] breadth of applicability,” he says. “Chemokines will dimerize with themselves, but also [with] other chemokines. Do you get similar signaling if you take another chemokine and attach it to these transmembrane chemokines?”

The team aims to explore this and related questions, Hattermann says, including whether other transmembrane ligands, such as tumor necrosis factors and ephrins, use similar mechanisms. The researchers also plan to investigate the prevalence of inverse signaling outside cancer, for example, during development. “We have some hints that it’s not restricted to malignant tumor cells,” Hattermann notes.