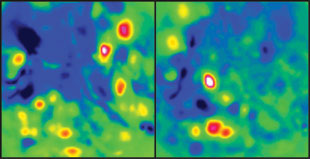 ODOR PATTERNS: These two panels show mouse olfactory bulb neurons responding to two different odors. In afterimages, patterns like these persist despite the odor being removed.COURTESY OF ALAN CARLETON

The paper
M.A. Patterson et al., “Odor representations in the olfactory bulb evolve after the first breath and persist as an odor afterimage,” PNAS, 110:E3340-49, 2013.

The finding
Afterimages are the lingering sensations of a stimulus that is no longer present. Taste, vision, hearing, and touch can all induce afterimages, and now, Alan Carleton of the University of Geneva and his colleagues have described the phenomenon in mouse olfaction. They showed that even after an odor is removed, some neurons persist in their odor-specific activity.

The details
Carleton’s group found little activity in olfactory glomeruli, where incoming sensory neurons terminate, once an odor was removed. However, activity continued in some olfactory neurons located downstream from...