ABOVE: Leukemic regenerating cells, rather than leukemia stem cells, may be responsible for relapses after chemotherapy.
© ISTOCK.COM, MARILYN NIEVES

Cancer researchers have long supposed that relapses of acute myeloid leukemia (AML) arise from a population of leukemia stem cells (LSC) that were dormant and therefore likely protected from chemotherapies that target dividing cells.

But when Mickie Bhatia of McMaster University in Canada and colleagues analyzed cancer cell populations from patient samples as well as those obtained from AML cells grafted into mice, they found that LSCs were depleted during chemotherapy. “By kinetically profiling the cells, we got a better impression of what was being killed during the chemotherapy, but also how it came back,” says Bhatia.

His team then sampled patient bone marrow cells at multiple time points post-chemotherapy, in parallel with samples from xenografts grown from the patients’ tumors. In both, they identified a small population of cells, dubbed leukemic regenerating cells (LRCs), that had a gene expression profile distinctly different from that of LSCs. “The leukemic regenerating cells are actually a product of a response to chemotherapy,” says Bhatia. LRCs were present in high numbers only transiently, with their numbers falling as relapse occurred. One distinctive feature of these cells was the production of several G-protein-coupled receptors (GPCRs), and the researchers found that suppressing the expression of a specific GPCR gene in LRCs prevented relapse in chemotherapy-treated mice.

“Maybe there’s a short window after induction [of] chemotherapy, where one could come in with a very specific therapy directed against this small population of leukemia regenerating cells,” says David Sykes, who studies AML at Massachusetts General Hospital and was not involved with this research. Sykes says the chances of finding similar target cell populations in other cancers is high. 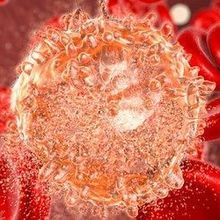