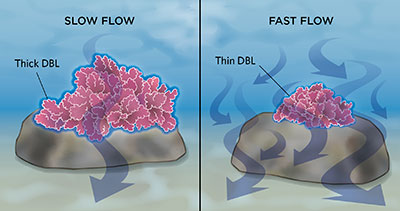 Anthropogenic ocean acidification threatens the survival of countless species and the delicate marine environments they live in. To understand these changes, Catriona Hurd of the University of  Tasmania in Australia and colleagues have been measuring how a reduction in pH affects coastal seaweed communities, in particular, coralline algae—red algae that form calcite deposits in their cell walls. Covering...

For coralline algae and other calcareous species, the process of photosynthesis during the day and respiration at night can change the pH of the surrounding water—a μm- to cm-thick region called the diffusion boundary layer (DBL). Hurd and her colleagues had speculated that these pH changes might protect coralline algae from the effects of ocean acidification.

The research team studied growth rates and net calcification of the coralline alga species Arthrocardia corymbosa under current ocean acidity conditions (pH 8.05) and projected acidity for 2100 (pH 7.85), and also varied water-flow speeds controlled by magnetic stirrers in each culture chamber. The group found that over a 40-day period, algae experiencing low-pH and high-flow conditions lost plant mass and calcification. Algae in low-pH and low-flow conditions grew more slowly than in higher pH conditions, but fared better than algae exposed to fast water flow and a low pH. Low-flow algae in acidified seawater also had a DBL nearly 500 times thicker than their low-pH counterparts in the high-flow tanks.

The authors conclude that, among those algae grown in low-pH seawater, the different responses to the fast- and slow-flow exposures are due to differences in the concentration of carbonate ions. At low carbonate saturations, which occur in acidified waters, the calcite in the algae’s cells begins to dissolve. Thicker DBLs resulting from slow water flow protect algae from those changes in ocean water chemistry, allowing the algae to retain the calcite.

“[The result] points out to us that there are a lot of things that we need to look at to understand the consequences of acidification,” says James Barry, a senior scientist at California’s Monterey Bay Aquarium Research Institute, who was not involved in the work. Coauthor Christopher Cornwall concurs: “It’s not just as clear-cut as putting an organism in a jar and lowering pH. We need to take into account light and water-motion conditions.”

Because the experiments were done in a lab setting, Cornwall says, it’s not clear how coralline algae would react within a larger ecosystem exposed to ocean acidification. But Barry notes that one of the implications of the findings is that for algal communities that are on the threshold of survival or dissolution in acidified conditions, the protection afforded by DBLs “can make a big difference for keeping them on the survivable side or pushing them over the edge to where they can’t make it,” he says. “In the future, you would expect to see in seas that are rough, coralline algae might do worse than they do now.”