Cable bacteria (family Desulfobulbaceae) are known for forming long lines of cells that stretch through underwater sediments and usher a stream of electrons through their ranks. It was thought that these living electrical wires couldn’t grow in environments shared by animals such as brittle stars or mantis shrimp, which violently stir up the mud and might cut the microbial cables to bits. But it turns out that cable bacteria can withstand this upheaval—if they team up with parchment worms. 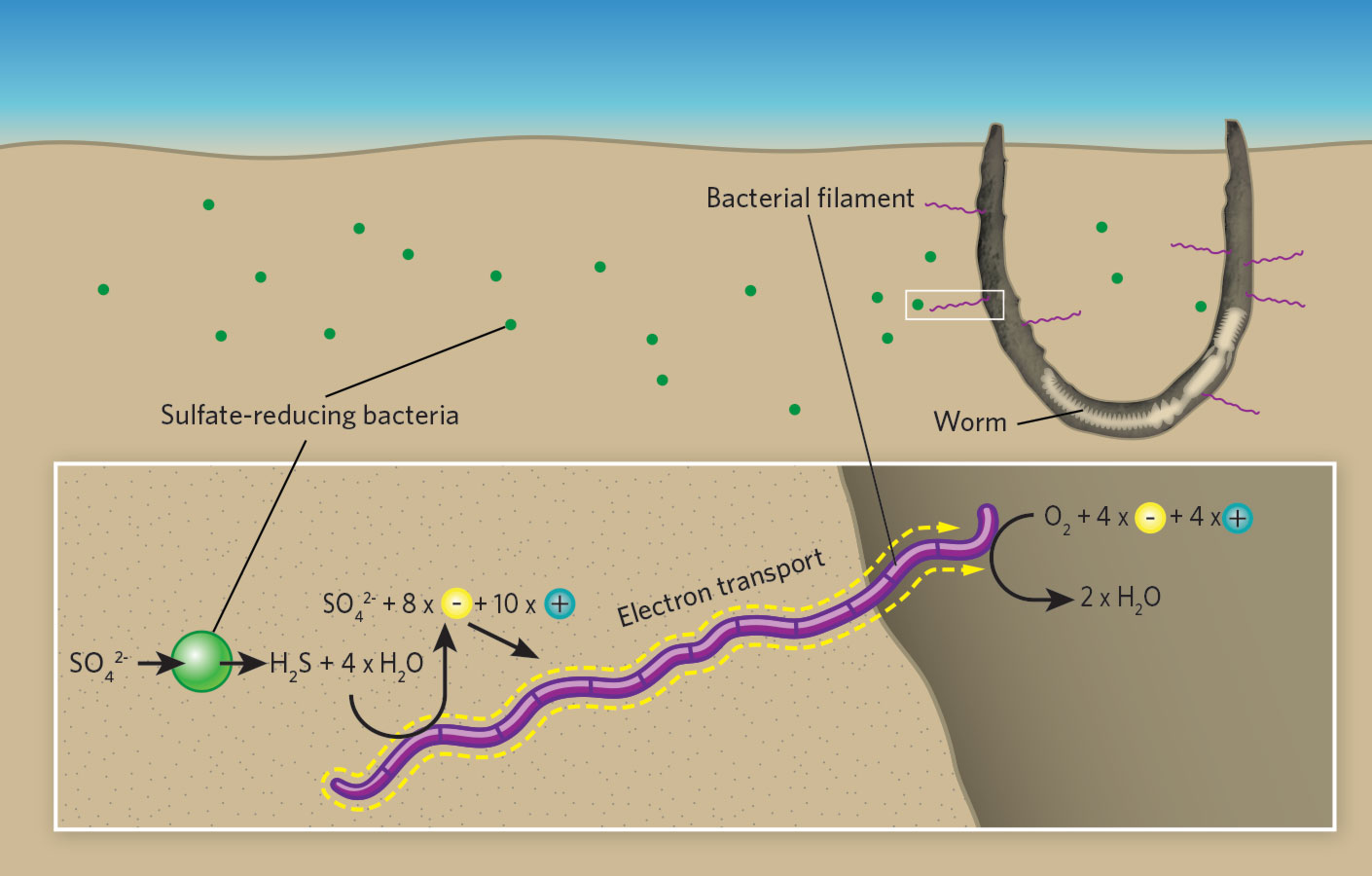 PLUGGED IN: Parchment worms (Chaetopterus variopedatus) construct tubes in underwater sediment and constantly pump water through the structures to collect oxygen. Cable bacteria (Desulfobulbaceae) act like electrical wires, connecting to the tube lining and providing electrons that react with the oxygen, generating energy for the microbes. The bacteria extend radially in the mud to gather these electrons from sulfide—compounds often produced by nearby bacteria. WEB | PDF
© KELLY FINAN

Cells at the sediment-embedded ends of these bacterial filaments collect electrons from sulfides and other donor molecules in the sediment and pass the particles up the cable to react with oxygen in the topmost layers of mud. The process releases energy for all the cells within the filament. Researchers had thought that cable bacteria must typically build filaments straight down through centimeters’ worth of sediment to have access to both the electron-donating and electron-accepting environments, a feat that couldn’t be achieved in agitated areas of the seafloor. But Stony Brook University marine biogeochemist Robert Aller wondered if they might still be found lurking somewhere in perturbed sediments.

Aller and his colleagues went searching for the microbes in the mixed-up mud of the Great Peconic Bay and Long Island Sound in New York. The team collected sediment cores, then used radiochemical analyses, light microscopy, and other techniques to learn how solutes and bacteria were distributed in each sample. The analyses revealed that cable bacteria aggregate in stable zones near parchment worms (Chaetopterus variopedatus), with filaments growing up to 650 µm in length in these areas.

Parchment worms construct sturdy U-shaped tubes from carbohydrates and amino acids and continually collect dissolved oxygen from water that they pump through the fibrous structure. A tube can stay in place for months or more while its resident worm hunkers inside, providing bacteria with a shortcut into the mud. The results of Aller’s study suggested that cable bacteria, which require both a reliable oxygen source and physically stable surroundings, cozy up to these worm tubes to survive.

Instead of growing straight down into the mud, the microbes radiate in all directions from the parchment worm tube “just the way people crowd around a luggage carousel at the airport,” Aller says. Belinda Martin of the University of Western Australia and colleagues previously found that cable bacteria form similar relationships with seagrasses, huddling around their roots for stability (ISME J, 13:707–19, 2019).

Because the sediment samples were only gathered from a few locations, it’s not clear how widespread the phenomenon of the cable bacteria–worm partnership is, says Sairah Malkin, a biogeochemist and ecologist at the University of Maryland who was not involved in the work. Nonetheless, the findings suggest that cable bacteria may occupy a larger variety of environments than previously thought, she adds—including sediments that get disturbed by other organisms.

Beyond parchment worms and seagrasses, questions remain about what other species cable bacteria associate with, perhaps even as partners with which they exchange electrons. “A big exciting question could be, can other microbes plug into the cable bacteria?” says Malkin.