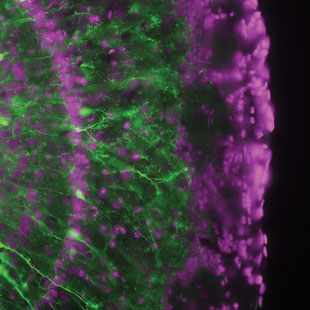 The context
A number of viruses can infect the brain by traveling up the axons of olfactory receptor neurons into the olfactory bulb. Rarely, however, do any of these viruses spread to the rest of the brain—a phenomenon of neuroprotection whose mechanisms are not well understood.

The finding
In mice infected with RNA-based vesicular stomatitis virus (VSV) or DNA-based cytomegalovirus, researchers from Yale University found evidence of antiviral interferon-stimulated gene (IFG) expression as far away as the posterior brain, even though they could not detect any nearby virus. This distant interferon response...

The conversation
Interferons released by infected cells typically only travel nanometers to alert neighboring cells. In this study, interferon responses appeared more than a million times farther away. “It suggested some kind of long-distance signaling from the front part of the brain to the back part of the brain,” says study coauthor Anthony van den Pol—although it’s still not clear how those messages are transmitted.

Next steps
“This gives a fundamental explanation of why we have so little infection of the brain cells by viruses,” says Ganes Sen, a molecular geneticist at the Cleveland Clinic who was not involved with the research. He wonders if other virus entryways, such as the lungs, have similar long-distance signaling systems. Van den Pol’s group will for now focus on the brain and whether other viruses elicit the same response.