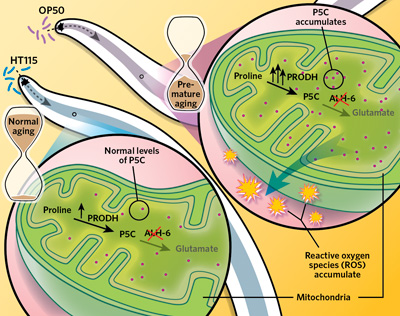 ACCELERATED AGING: C. elegans whose alh-6 gene is impaired cannot convert 1-pyrroline-5-carboxylate (P5C) to glutamate, but the impact of this defect differs depending on diet. Worms fed the E. coli strain HT115 maintain low activity levels of PRODH, an enzyme that converts proline to P5C. In worms fed OP50 E. coli, PRODH activity increases, leading to an accumulation of P5C. These worms die sooner, perhaps because of an associated increase in reactive oxygen species.© KIMBERLY BATTISTA

Evidence that diet can profoundly affect aging is beginning to emerge, sometimes through targeted studies and other times by accident. While breeding mutant C. elegans worms for an unrelated experiment, Sean Curran and Shanshan Pang, a pair of researchers who study aging at the University of...

In the lab, C. elegans feeds on a variety of E. coli strains—most commonly, the B strain OP50 and the K-12 strain HT115. In an initial study to probe the effects of a particular gene on life span, Curran and Pang found worms’ longevity considerably reduced if the gene alh-6 was impaired. “The first couple of days of development, they are pristine, and then they tank immediately after,” says Curran. The worms normally live two or three weeks, says Pang, but mutants lived fewer than 10 days. Their ability to reproduce was also severely curtailed.

The mutant worms had been fed an OP50 diet. In a subsequent experiment, the pair happened to switch the diet to HT115 E. coli, simply to suit the protocol—and the worms lived out normal life spans. The serendipitous finding indicated that alh-6 protects worms from some deleterious effect of the OP50 diet. The question now was, how?

Alh-6 encodes a mitochondrial enzyme that is part of the proline catabolism pathway. The enzyme converts 1-pyrroline-5-carboxylate (P5C), a toxic intermediate, to glutamate. Worms with dysfunctional alh-6 are unable to clear the accumulating P5C, which has been reported to impair mitochondrial homeostasis. Pang and Curran speculate that the gene preserves mitochondrial function in the face of suboptimal diets that would otherwise damage mitochondrial homeostasis and lead to premature aging. “It’s not simply diet that affects aging,” says Pang. “It’s genes affecting the animal’s response to diet.”

The researchers inferred that impaired mitochondrial function would lead to a buildup of reactive oxygen species (ROS), suspected culprits in premature aging. And in fact, when they looked for ROS, they found higher levels in worms fed OP50 diets.

Many researchers are knocking down genes in C. elegans to understand the genetic basis of longevity, but this study takes into account that the interplay between diet and genes can influence life span, says Jennifer Watts of Washington State University who was not involved in the work. “That’s what’s unique about this study and makes it a breakthrough,” she says.

“What’s still a big question is, ‘Just what are these differences in the E. coli?’” asks Watts. “Is it their nutrient compositions or is it something [about] the metabolism of the E. coli?” Pang and Curran plan on figuring that out next.